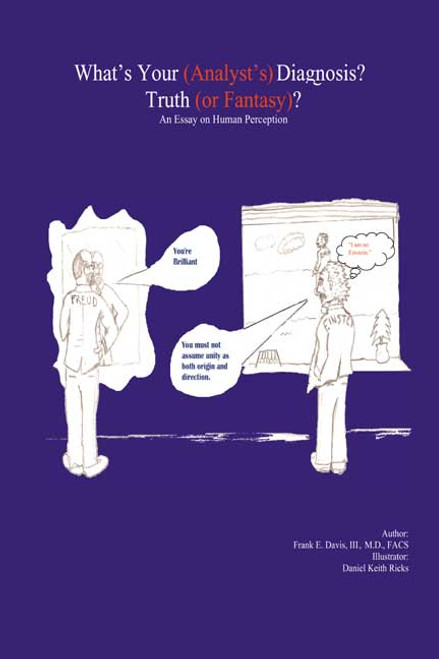 by Frank Elbert Davis, III, M.D., FACS Human perception of reality, and scientific advancement, is linked to the truthfulness of verbal and mathematical description(s) of real event(s). Human verbal and mathematical descriptions of reality reveal psychic reality of those persons projecting the descriptions and relate to prior real experiences or verbalizations of others. This book presents as natural phenomena: 1) Free will of human perception, or its absence, results from the truthfulness, or fantasy world conceptualization, of a primary relationship. 2) The Unified Field Theory of Charged Particle Relation(s) and Mass-Energy Transformation(s) gives universal understanding of positive, and negative, realities of the universe and unifies, by truthful mathematical identification, the three current theories of physics. 3) Structural Development of the personality is an identification process of the self, as a being, apart from the genetic person. To use Einsteins words, it is apart from humanity. ABOUT THE FRONT COVER The front cover illustrates two states of consciousness. The red words exhibit the subconscious, while the white words project the conscious. For Freud and Einstein, as pictured looking at themselves while talking to each other, the consciousness is on their object, while the subconscious is on the self. ABOUT THE AUTHOR A retired general surgeon, Frank Elbert Davis, III, M.D., FACS received his A.B. in chemistry and M.D. in medicine from UNC Chapel Hill, 1969 and 1973. He is a retired member of the American College of Surgeons, the Southeastern Surgical Association, and the American Association for the Surgery of Trauma. Dr. Davis enjoys sailing and hunting. He was inspired to write this book because of his recognition that narcissism is both painful and self-defeating. Dr. Davis is a Christian, whose writing style uses predominantly secular (non-religious) literature. (2007, paperback, 110 pages)
×