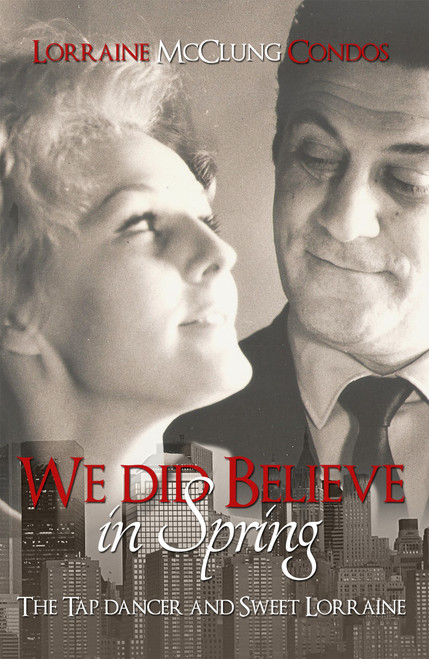 We Did Believe in Spring: (The Tap Dancer and Sweet Lorraine)
by Lorraine McClung Condos

We Did Believe in Spring by Lorraine McClung Condos is the endearing love story of a mother of four who meets the man of her dreams, the true love of her life.

When Lorraine met Steve, she was struggling to support her children working as a hat check girl, waitress, and part-time model in New York. She seemed to know that he was the one, even though he was over twenty years her senior. He was a unique entertainer a teller of tales, a musician, and most notably a jazz tap dancer of renown--previously a part of the Condos Brothers, an international tap dancing duo who had appeared in several movies with stars like Betty Grable.

Steve was now in the process of restarting his career as a solo performer, working cruise ships, nightclubs, and finally Broadway in the musical Sugar, which later went on the road. He worked with such greats as Robert Morse, Cyril Ritchard, Gregory Hines, Jule Styne, and Producer David Merrick.

Lorraine and Steve Condos lived a wonderfully exciting life and while he was the entertainer, she played a huge role in his life as loving wife, confidante, and his business manager all this right up until his tragic death after a performance in Lyon, France. She shares her grief on the final leg of their twenty-five year journey together--- returning him to Hollywood Beach, Florida, the place they called home where she must now live without him.

About the Author: Lorraine McClung Condos was born in Florida, but has spent much of her life in New York, where she now resides. A mother, grandmother, and great-grandmother, she enjoys writing poetry, which she sometimes performs at the Cornelia Street Caf in New York City.

Although this is her first book, her intent is to turn her memories into a screenplay in the coming year. Blessed with good health, friends, and family, this vibrant octogenarian loves to dance and is currently learning the Argentine Tango.