Wake Up, America: A Handy Western Man's/Woman's Guide to Refuting Dishonest Islamic Recitals of Peaceful Coexistence with the West 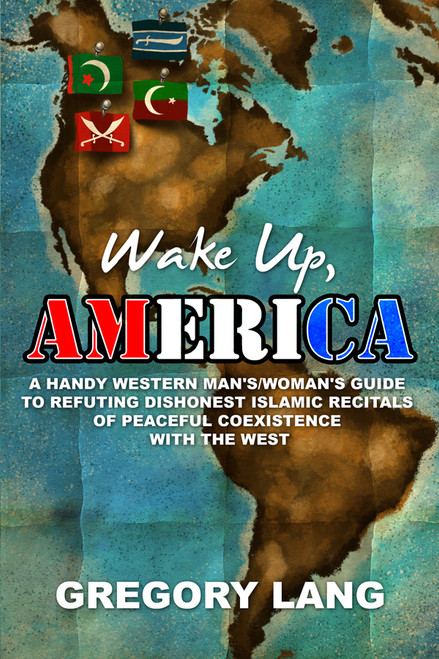 Wake Up, America: A Handy Western Man's/Woman's Guide to Refuting Dishonest Islamic Recitals of Peaceful Coexistence with the West

Wake Up, America: A Handy Western Man's/Woman's Guide to Refuting Dishonest Islamic Recitals of Peaceful Coexistence with the West
by Gregory Lang

North and South Americans of Christian, Jewish, Buddhist, Hindu, and many other backgrounds need to wake up now to the very real danger of the Islamic Sharia law threat. Atheists, agnostics, Muslim-Americans, and secular humanists should also read this book, because they, too, should know that they are facing a loss of freedom and security in Western nations. Western Europeans have awakened too late, to find great swaths of their cities already Islamicized and their courts infiltrated by Sharia law. And what is the prime source of Sharia law? It is none other than the Muslim holy book, the Quran itself. Wake Up, America serves to arm the readers with the knowledge necessary to argue effectively against anyone who tries to convince people that Western nations have nothing to fear from the ever-encroaching political Islam. Islamization of non-Muslim nations has already been going on for centuries, and now it is also occurring in the United States, Canada, and elsewhere in the Western Hemisphere. Wake up, Americans! Read this book to discover for yourselves exactly what the Quran commands its Muslim followers to believe and think about non-Muslims, and more importantly, how to behave and act toward all non-Muslims.

Waking Dreams and Rememberings: A Book of Lyrical Prose