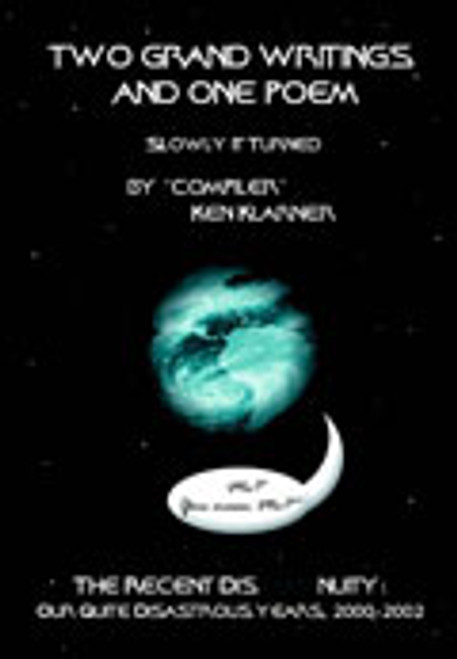 by Ken Klarner In Two Grand Writings and One Poem: Slowly It Turned; The Recent Discontinuity: Our Quite Disastrous Years, 2000-2002, Ken Klarner, the compiler, offers writings where there are two settings, one Recent, and one not very recent, each providing the supposed history that you want when imagination works on a grand scale. (Also, ever read a science fiction POEM?) Think of what could happen if something made the Earth turn slower, if that ultimately kept its areas other than the Pacific constantly out of direct sunshine just before a deadly change in the sun. The first part of this book is about just such a Recent past. After that part youll find a completely different Earth Turned just as Slowly. For that Earth the heat output of the sun is greatly reduced, and the dimension-creating Planners, for their own unrevealed reasons, transfer people from high population areas of World One to that unique world during sudden vanishing events. The world they come from has a very different 20th century as a result of this. The Planners seem to have plans for many Earths. They also aim to go to the stars. Can they? Should they? Should we?Can we? ABOUT THE AUTHOR: A native of Wisconsin, getting his B.A. degree in 1969 from UW Madison, Mr. Klarner (Kenneth A.) enjoys a variety of hobbies including astronomy, ancient history, keeping a music video collection, and storing original thoughts on files in word processor diskettes. (2002, paperback, 86 pages)
×

Two Faces of a Man!

Two Among the Righteous Few - eBook