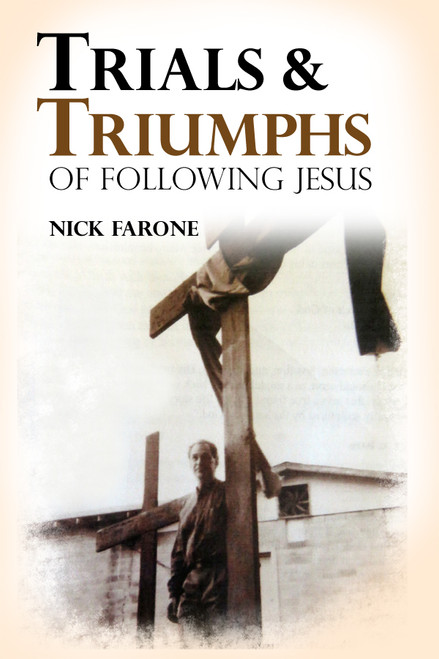 Trials and Triumphs of Following Jesus
by Nick Farone

The book you hold in your hands represents more than just a simple memoir of the years of an extraordinary ministry. It contains valuable lessons in what many have called, the faith life. As a human being, each of us is used to acting based on what we can sense, what we can touch, see, hear, smell or taste. In the more than twenty years I have known Nick and Sandy Farone, I have been privileged to watch them live based on something else. Faith in the unseen God Who has nonetheless met them at every juncture and honored their willingness to do whatever He told them.

I can personally vouch for many of the miracles you read about here. I have been present at many of them, and talked to Nick about others even before they were published in his monthly newsletters. But even more importantly, I can vouch for the life of faithfulness and faith living that has been the hallmark of his and Sandys life.

As you read this book, let its words and their meanings sink deeply into your soul. Realize that this life is available to all who will trust. That isnt always easy, but Nick and Sandy are living proof that it works! It will work for you too!

This is an extraordinary story of how a man who enjoyed a life of material riches, great comfort, and acclaim gave it all up when he felt a void in his heart, and began reaching out to find God. This book is truly inspirational of how faith really works.

Nick Farone has lived it! From Broadway to Hollywood to Louisiana, Nicks book shows us how trials, tribulations, and testings of the faith journey will produce the miracles, blessings, and faithfulness of God. I recommend this book to anyone who is on a faith journey.

Nicks book is uplifting and tells an incredible story of faith that comes from the heart of one who has truly walked the talk in living a life of faith as an authentic disciple of Jesus Christ. I know you will be greatly touched, encouraged, and blessed as much as I was.

A professional singer since he was 18 years old, Nick Farone always felt there was something missing in his life. In 1974 he began singing at the Marble Collegiate Church in New York City and for the New York City Opera.

Nick continued to advance himself in the entertainment world, headlining in Night Clubs to standing ovations, recording a record that was a pick in Record World in 1978. Nick entered the Soap Opera world and became a familiar face on many popular shows for 10 years. He continued to sing on Sundays in different churches of all denominations. Nick noticed God using his songs to touch people.

In 1987 Nick left the entertainment world to follow the Lord. It was an incredible challenge that would bring amazing rewards and establish a work that would change a city and thousands of lives in the process.

Trials and Tribulations of Luci - eBook

Trials and Tribulations as a Single Mom

Trek to America: Angels of Mercy