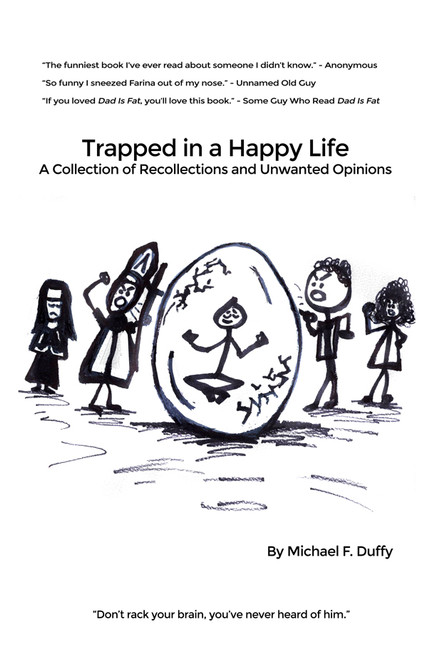 Trapped in a Happy Life
by Michael F. Duffy

In his memoirs, Trapped in a Happy Life, Michael F. Duffy reflects fondly and funnily upon his formative years in Philadelphia. Between the dangerous games played in the streets of his neighborhood to the terror he endured at the hands of nuns in school its a wonder that he survived to tell any of these tales, but were glad he did.

As he moves into adulthood, Duffy tells heartwarming tales of My Beloved Wife (abbreviated MBW for times sake), and skewers everyone from Donald Trump to overenthusiastic clappers at concerts. But even his most barbed remarks are tinged with an endearing humor that keeps the reader hooked.

Michael F. Duffy was born and raised in West Philadelphia and now resides in Bryn Mawr, Pennsylvania, with his wife, Madeline; dog, Murphy; and cat, Sophie. During the week he works as the regional manager of a prominent insurance adjusting firm and on Saturdays he works as someone trying to imitate a golfer. His property taxes are very high and his siding needs to be replaced (on both the house as well as his body).

Though Trapped in a Happy Life is Duffys first published work, he has an extensive literary output. In grade school he wrote the poems Fog and its sequel, Still Foggy after all these years. From the 1970s to the 1990s he penned numerous breakup letters including Dear Eunice, Dear Olga, and Dear Phil. Later he developed a unique complaint style, honed in letters to Home Depot, Empire Carpet, Crown Plaza, and many more. In his later life he has returned to poetry. His obscene limericks can be discovered in bathroom stalls across the east coast, though he uses the penname Pat Bottoms.

Life Embraces: A Collection of Poems