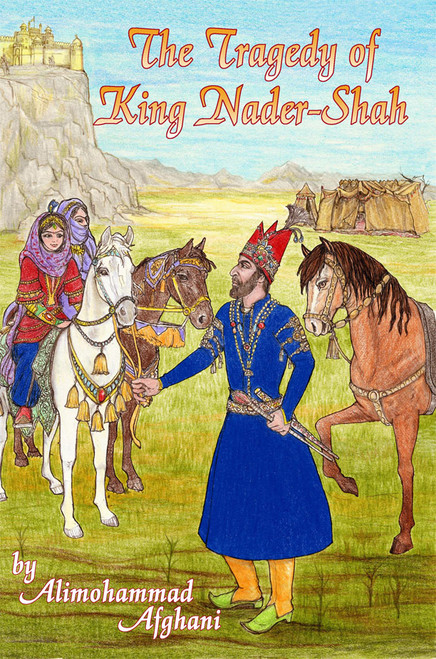 The Tragedy of King Nader-Shah
by Alimohammad Afghani

The Tragedy of King Nader-Shah is a work of historical fiction based on the most chaotic period of the life of the title character.

Nader-Shah, during the two decades of his reign, never takes a rest to enjoy his throne. In fact he has no capital. In addition to his wife, Goharshad, as the countrys Queen, he has taken a number of concubines, mostly the daughters of regional rulers. Nader has two sons, the eldest, Rezagholi from his first wife, who died at the birth of her son. After his first wife died, Nader married her sister, Goharshad, who gave birth to Nassrolah, who grows up to be a fearless warrior. He took part in Indias invasion with his father, and he helped his father to obtain the Peacock Throne and other great diamonds. Rezagholi, however, is a peaceful man who disapproves of his fathers constant warfare. Nader suspects Rezagholi of plotting a coup, and when his son fails to catch an attempted assassin, tensions quickly escalate. Driven to madness by his own actions, King Nader orders the killing of his own people, ultimately bringing his tragic life to a brutal end.

Narrated in a mixture of prose and poetry, The Tragedy of King Nader-Shah explores hubris and human nature through classical dramatic catharsis.

Alimohammad Afghani was born in 1926 in Kermanshah, Iran. He graduated from military college in Tehran in 1949. In 1951 he was sent by the Iranian army to the United States for a six-month course of military study. Back in Iran, he was thrust in prison for five years from 1954 to 1959 because of political activities against the Shah. In prison he wrote his first book, a novel criticizing polygamy, titled Lady Ahus Husband. Although the book did not spare to criticize the politics of the time, it received the Royal Prize for the best novel ever written in the Persian language. Applauded by many great writers, it was later made into a film.

The author of numerous other works, Afghani currently resides in California. To meet with his fans, he travels to Iran a couple months a year.