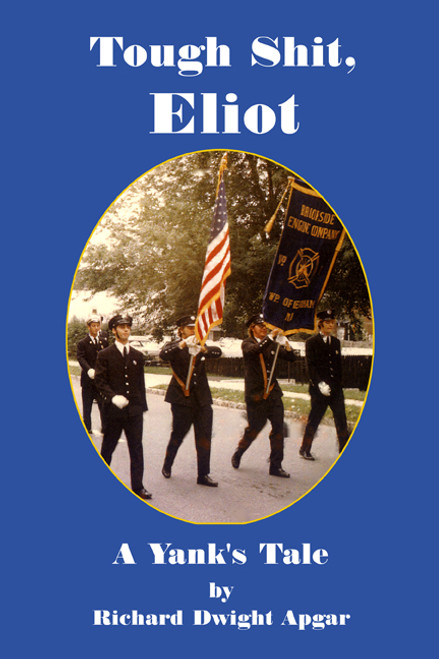 
Availability: Usually ships in 2-3 business days. + Available for immediate download to your computer in e-book format - see bottom of page.
___________________________________________________________
Tough Shit, Eliot: A Yank's Tale
by Richard Dwight Apgar Growing up in small-town New Jersey, young Eliot Stearns Thomas learns some hard lessons, and although the pain he feels is real, sometimes it just cant compare to whats going on in the world at large. With the Vietnam War looming and young men everywhere bracing for the call that would forever change their lives, Eliot and his best friend, Alfred, are busy finding ways to make the times more bearable. Whether sneaking off into the woods to light up a joint or finding that one true love who changes everything, indeed the times they are a-changin, and Eliot will soon find out exactly what that means. Spared the call to serve his country, Eliot instead answers the call to serve his fellow townspeople by joining the Main Street Fire Department. Its during this time that he learns putting out fires with water is one thing; putting out the little fires one faces in life is an altogether different story. ABOUT THE AUTHOR Born in New Jersey but making his home in New Mexico for the past twenty-seven years, author Richard Dwight Apgar took inspiration to write his story from real life. Its here that this former Bernalillo County Fire Department chief brings his experiences to the forefront, as lived and breathed through his lead character, Eliot Stearn Thomas. When not writing, the Rutgers University graduate, now president of Fire Service Equipment, Inc., enjoys spending his spare time gardening and making pottery. Mr. Apgar has also been published in the trade journal Fire Chief Magazine, where his article entitled Adobe Construction: How Fire Resistant Is It? appeared in April 1986. (2008, paperback, 156 pages)
×