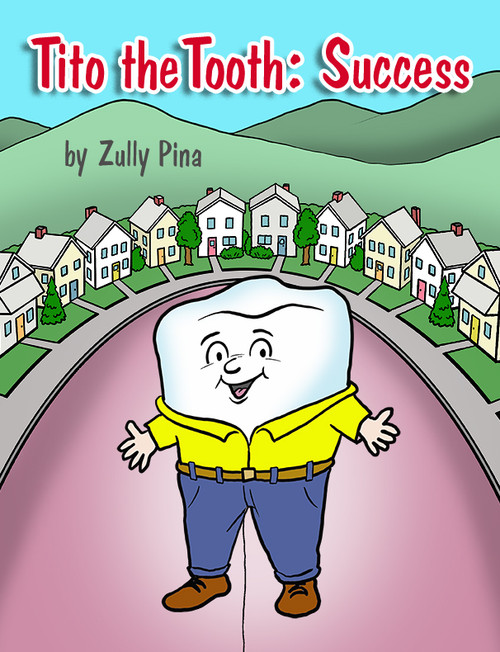 Tito the tooth has many friends in Mouthland, and he loves visits from Mr. Toothbrush, Mr. Toothpaste, Mr. Dental Floss, and their guidance counselor, Mr. Dentist. He is always first in line to see them whenever they come to visit. But, when a new friend, Cavity, comes to Mouthland, he tells Tito he's very scared of Mr. Toothbrush, Mr. Toothpaste, Mr. Dental Floss, and Mr. Dentist. What will Tito do? And will his new friend affect his chances of entering Tooth Fairyland? Tito the Tooth: Success was written to help children understand the importance of caring for their teeth and to teach them that the dentist is not scary. Dentists are here to help!

Zully Pina was born in the Dominican Republic, and although born into a mixed-wealth family, she and her grandmother, Mama Rosa, were not wealthy. At an early age, she became a police officer. After graduating college with a degree in English language and American English expressions, she became a news anchor radio broadcaster and resigned from her police officer position. Later, she started working as a TV producer. After Mama Rosa had a few brain strokes and better conditions were needed, Pina moved to the USA and became a citizen. Pina is a single mother, and had to leave her Mama Rosa and her son, Diego. Tito the Tooth: Success is her first book, and she has many more in the works. Pina's inspiration to write this book came when she was working as a marketing manager for a dental practice. While doing the marketing research, she found that most of the children in one way or another were scared of the dentist and not too crazy about using the tooth cleaning tools (toothbrush, toothpaste, dental floss). Then it occurred to Pina to create a character that children love and identify with. As a result, we have Tito the Tooth: Success.