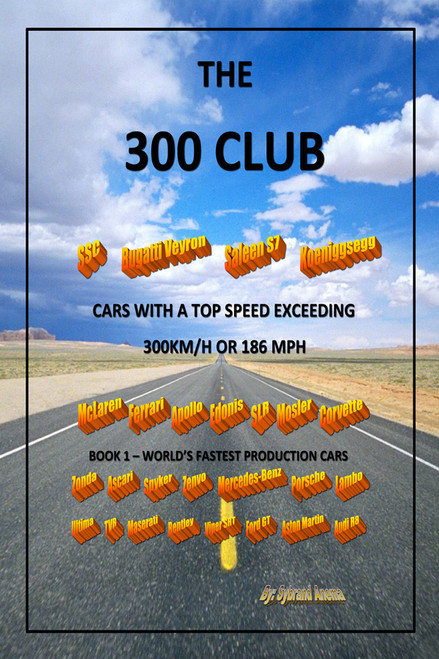 As little as ten years ago, it was said to have been impossible to break the magical super-margin. When McLaren broke the magical 380km/h (236mph) barrier in 1992, many specialists in the motoring field believed the ultimate top speed was achieved. Some even announced that it was a top speed never to be equaled or bettered. If only they knew how wrong they were.

The cars in this book, The 300 Club - Cars with a Top Speed Exceeding 300 KM/H or 186 MPH, have all reached that magical 300km/h mark and most have passed it by some margin. The worlds fastest production cars are covered in this booknot all of them are everyday production cars. Some are wonder cars produced by limited number and built with one thing in mind, and that is to break the magical mark. Most top-class saloons are capable of reaching speeds of 250km/h and beyond, but only the very finest are capable of reaching and breaking the magical mark of 300km/h. Only a couple saloons have ever been able to reach the 400km/h mark, and those are also covered here. Sit back, strap yourself in, and enjoy the fast but magical ride.

S. Anema is a construction site agent who resides in RSA with his wife, Helene, and son, Sybie. He went to college for civil engineering and project management classes.

This Is My Story and IÂm Sticking to It!