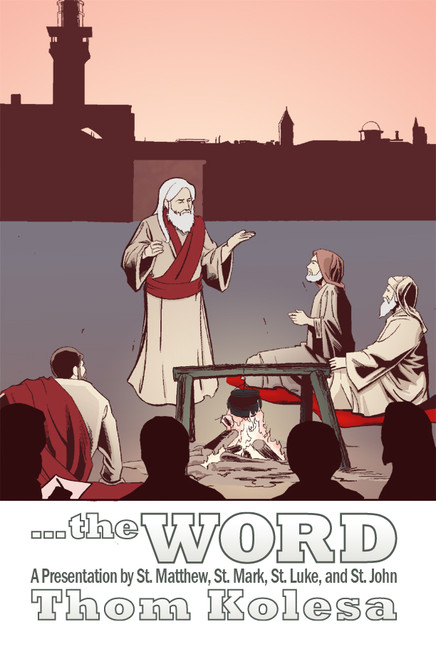 the WORD
by Thom Kolesa

Thom Kolesa imagined what it would be like to learn more about the Gospels by reading it as a Play format, during which an imagined meeting of the four Evangelists verbalized events they were most familiar with. Such an imagined meeting could have been possible, as they were all reportedly alive at the same time. The meeting most likely would have taken place between the years A.D. 50 and 60. It would have been very interesting and exciting to watch and listen as they unraveled their common objective of proclaiming the WORD.

Although their ages, backgrounds and styles of expression probably varied greatly, as did the audience to whom their remarks were directed, they all shared an experience with Jesus, either directly or with those who knew him.

Thom Kolesa is in his nineties. He was married to his wife, Anita, for seventy-two years before her recent passing. They had three children, one who was a Lutheran Minister, now deceased. Thom was active in the Military, in World War II as a U.S.M.C. Sergeant. His business career was as an engineer. He has a number of U.S. and foreign patents.

Well traveled, Thom has been to all fifty states and many foreign entities. He is still active in church work.

There is a Tomorrow: My Life