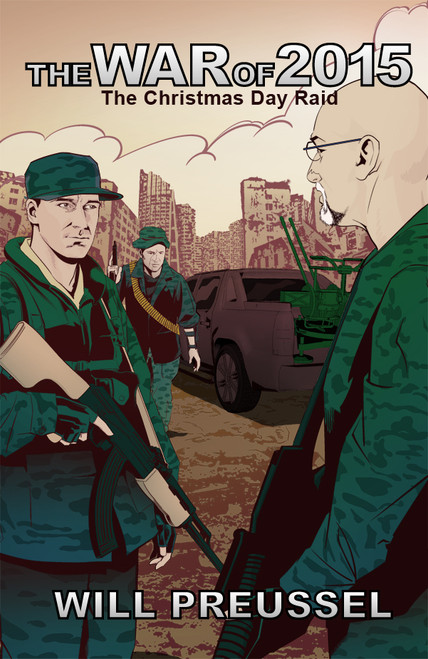 The War of 2015; The Christmas Day Raid
by Will Preussel

It is the year 2015. The path of history has diverted, and the United States is at war with itself for the second time in its history thanks to a lopsided election that gives disproportionate control to a single political party. The stakes are higher than they were in 1861 as the most powerful nation in the world risks throwing the entire world into tumult with a prolonged and brutal conflict. The Free States of America have exercised their self-proclaimed right to secede, but as in 1861, the remaining United States refuse to honor the split and demand that the rebellious faction return to the fold or else face the consequences.

One part candid speculation, one part cautionary tale, and one part action-adventure novel, The War of 2015 paints a vivid picture of what could be if political disputes erupted into violent and militaristic action. How would a Civil War be fought in the modern era? What will be the result? What will the global ramifications be? Can the United States recover from a second Civil War?

Will Preussel was born in New Jersey, grew up in North Carolina, graduated from North Carolina State University and spent most of his working career in Alabama. He spent three years as an officer in the US Army during the Vietnam War. He is an electrical engineer by profession, has spent most of his life working as a technical intelligence analyst, and has a passion for military history. He is using his retirement to explore the world of writing and has two more books in the works in addition to The War of 2015. He lives in Loma Linda, California, with this wife Sharon and enjoys spending time with his children and grandchildren. A lifelong member of the Republican Party, his very conservative views are woven into his writing. He is widely traveled within the United States and tends to write about areas he has visited.