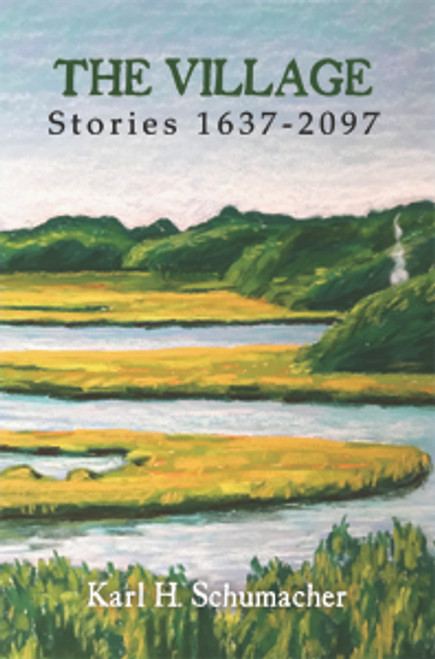 The brief yet passionate experiences of its citizens serve to show how humanity is shaped by common struggles, romances, and reveries. From the ancient to the futuristic, The Village creates a historical microcosm of the evolution of humanity. Told through the experiences of the young, the old, and the unborn, each character is created to feel timeless in their common intensities of life.

The Village is used as a stage, community, and a link to its residents across generations. It is where we all came from, and people have been brave, quirky, doubtful, and persistent since its very beginning.

“Schumacher’s foray into historical fiction could not be more timely as acknowledgment of the Pilgrim’s New World 400 years later is under examination and commemoration across the region. His inventive imagery and historic tone transport you to a time when the world was new and possibilities were endless. A remarkable tribute to the history upon which the Cape and the country as a whole have been built.”

“The Village, Karl Schumacher’s boldly imagined book of stories, does what collections are meant to do – provoke you to think. It also happens to be very well written, funny where it needs to be, and always clever. But it is the book’s premise that leaps out – one bit of earth, a village, is seen through the arc of time, from the landing of the first English settlers on Cape Cod to a not too distant future. We see repeated patterns of love, frailty, greed, intelligence, and stupidity unfold on an unchanging spit of land, telling us, in a very gentle way, that as much as things change, they stay the same. ”

- Paul Vidich, acclaimed author of The Coldest Warrior, An Honorable Man, The Good Assassin and works of non-fiction.

Karl H. Schumacher is a retired executive living in Connecticut and writing on topics of his passion.