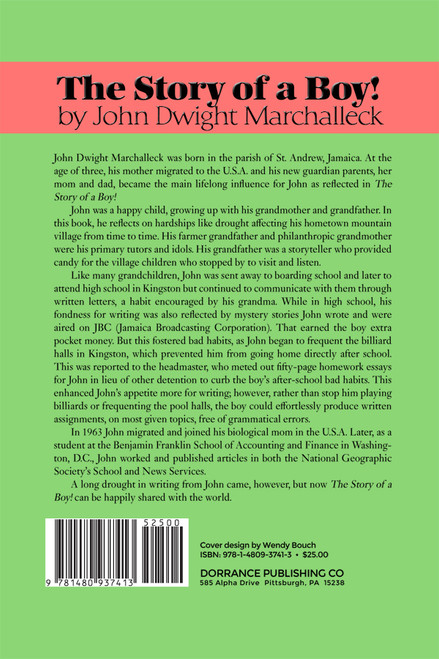 John Dwight Marchalleck was born in the parish of St. Andrew, Jamaica. At the age of three, his mother migrated to the U.S.A. and his new guardian parents, her mom and dad, became the main lifelong influence for John as reflected in The Story of a Boy!

John was a happy child, growing up with his grandmother and grandfather. In this book, he reflects on hardships like drought affecting his hometown mountain village from time to time. His farmer grandfather and philanthropic grandmother were his primary tutors and idols. His grandfather was a storyteller who provided candy for the village children who stopped by to visit and listen.

Like many grandchildren, John was sent away to boarding school and later to attend high school in Kingston but continued to communicate with them through written letters, a habit encouraged by his grandma. While in high school, his fondness for writing was also reflected by mystery stories John wrote and were aired on JBC (Jamaica Broadcasting Corporation). That earned the boy extra pocket money. But this fostered bad habits, as John began to frequent the billiard halls in Kingston, which prevented him from going home directly after school. This was reported to the headmaster, who meted out fifty-page homework essays for John in lieu of other detention to curb the boy’s after-school bad habits. This enhanced John’s appetite more for writing; however, rather than stop him playing billiards or frequenting the pool halls, the boy could effortlessly produce written assignments, on most given topics, free of grammatical errors.

In 1963 John migrated and joined his biological mom in the U.S.A. Later, as a student at the Benjamin Franklin School of Accounting and Finance in Washington, D.C., John worked and published articles in both the National Geographic Society’s School and News Services.

A long drought in writing from John came, however, but now The Story of a Boy! can be happily shared with the world.