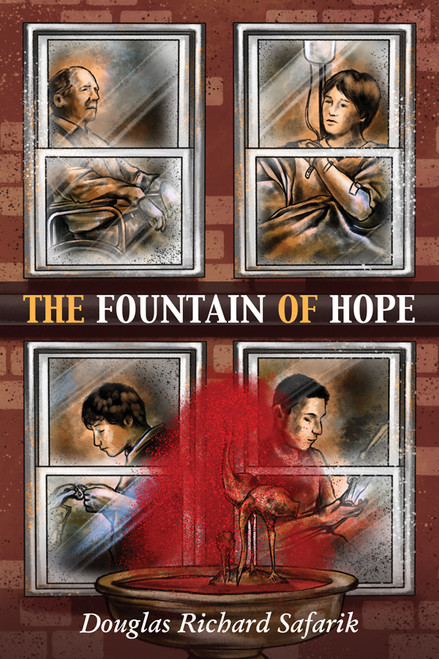 The Fountain of Hope
by Douglas R. Safarik

He left his fathers funeral and drove down to the hospital. His son was again in the ICU; his last blood transfusion brought unexpected complications. His son, Kevin, has cancer. Sam was grieving and the thought of losing Kevin clouded his thought. That very moment, his car suddenly crashed on a post

Sam awoke. He was not in the hospital. He was in his roomin his parents house. He was again sixteen years old. Months before his death as a forty-five-year-old adult, Sam received short stories about people he didnt personally know, but they recounted something about his past and somewhat foreboded a future thats not so pleasantthe impending death of Kevin. The stories came from an unknown author, and they were handed to him by a mysterious ruffian looking man, who mugged his friend and whom he thought was a threat to his familys lives. And then there were dreams that both horrify and puzzle himdeaths, vague memories, and the fountain at the vicinity of the hospitalthe one he remembered much as a kid, as a patient with epilepsy.

His death brought him to a forgotten past were he could undo mistakes and resolve the rift he had with his father. Guided by the stories and the dreams, he has to move fast to save the people who would find the cure for Alzheimers disease and cancera cure which could save his sons life in the futureand two weeks is all he has.

Douglas Richard Safarik was born in Vancouver, Canada. He is married and has raised three children together with his wife, Fran. He still lives in Vancouver, where he has been resident for fifty-seven years. This book, which is also his first-published material, is prompted by the passing of his son.