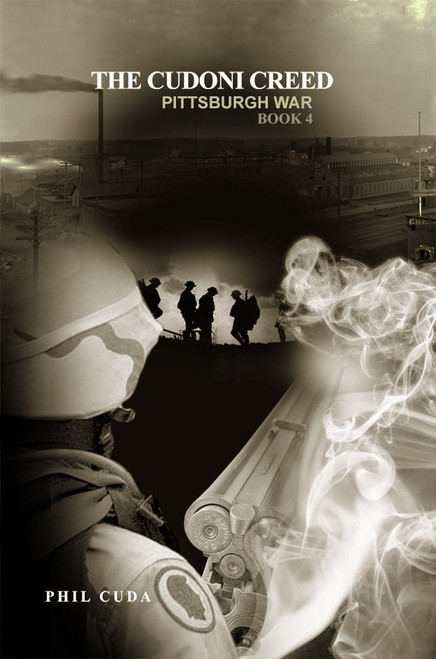 The Cudoni Creed: Pittsburgh War - Book 4 is about a man and his brothers who realize they must not yield to the threats of prosecution and extortion by the vicious and brutal Cosa Nostra running rampant in Pittsburgh. The aim of the Cosa Nostra is to rule the Pittsburgh Italians, regardless of how many they need to kill, but the Cudonis and their Creed do not allow them to be submissive. During these fierce wars and struggles, one of the brothers is murdered by the Cosa Nostra and the Cudoni Creed demands revenge. They kill the head of the Cosa Nostra and the men who carried out the murder and orchestrated his death, but the war continues with neither side willing to compromise. This eventually leads to all-out war.

Filippo Cudoni, the leader of the Cudoni family, now married and with family in Italy, cannot resist the love of his American first love and continually returns to her bed. When his wife arrives in Pittsburgh, everyone is staggered at how alike the two women are, almost like twin sisters!

Not all Italians submitted or accepted to be ruled by the mafia groups who originally were set up to help the people but ended up being their worst enemies. This is the story of good intentions over evil men, but even the good people are sometimes not saints. Women will appreciate the strength of the women depicted in the story.

Phil Cuda was born at the end of World War II in Italy. His father chose to immigrate to Australia rather to America, where his father had spent many years. His family lived in a part of Italy where living standards were poor, and so his father chose to move to where he had family but could keep his Italian traditions and have hope for the future.

Phil made a number of trips to Italy and researched the life there. He also came to America a number of times and did further research into the lives of immigrants to Pittsburgh, America, around 1900 before he published his first book (The Cudoni Creed; The Dream) and the second (The Cudoni Creed: Vengeance), both in 2013.

There are three more books in The Cudoni Creed series and six in total. Phil has written two other books based on Australian Secret Undercover Agents, who chase criminals around the world with a mission to exterminate them wherever and whenever.

Phil has had a successful business life but now has time to purse a writing challenge.