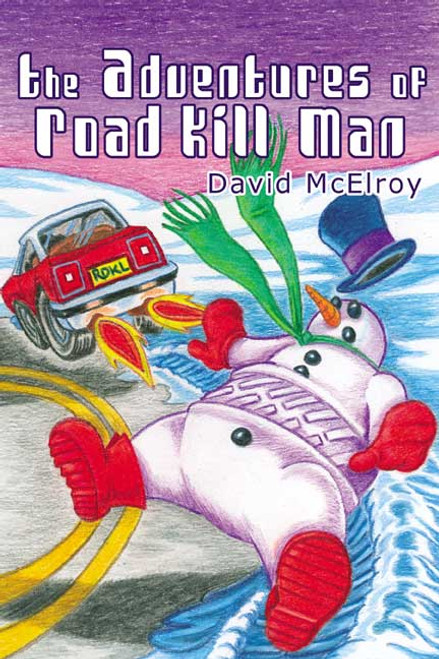 by David McElroy Some of todays most popular movies, at least with audiences, seem to be those featuring blood, guts, and gore the more the better. Taking this into account, David McElroy gives readers a tongue-in-cheek poke at this fascination by creating a fictional (and obviously mentally deranged) filmmaker, Steven Stumpsucker, who is a great admirer of the Friday the 13th and Nightmare on Elm Street horror/slasher film series. Relying on low-budget effects and limited casting, Steven has parlayed movie goers fascination with the murder and mayhem into a billion-dollar career featuring his own creation, Road Kill Man. The premise of the films is simple: Road Kill Man sees something alive on the side of the road and runs it down, instantly turning it into something dead, an unidentifiable splotch on the road. It doesnt matter whether it is human or animal, and it doesnt matter what road, highway, or street hes on if it is on or near the road, it is fair game. The fictional Stumpsucker has created 2000 films to date about Road Kill Man, and David McElroy has compiled a listing of those films, many of which may sound vaguely familiar to readers, including A View to a Road Kill, A Road Kill Named Desire, Road Kills in Toyland, and Four Road Kills and a Funeral. Stumpsuckers lucrative creation shows no signs of stopping for anything, man or beast, offering movie audiences an endless supply of gory, bloody, entrails-filled plots. ABOUT THE AUTHOR A native of New York, David McElroy is employed by the Mid-Hudson Psychiatric Center as a security hospital treatment assistant. He holds an associates of applied science degree in criminal justice from Orange County Community College and a bachelor of arts degree from SUNY at New Paltz, New York. In his spare time he enjoys reading and history. (2006, paperback, 56 pages)
×

The Adventures of Miss Quack and the Quackinbush Family - eBook

The Adventures of Sam in Space: Planet of the Sweets