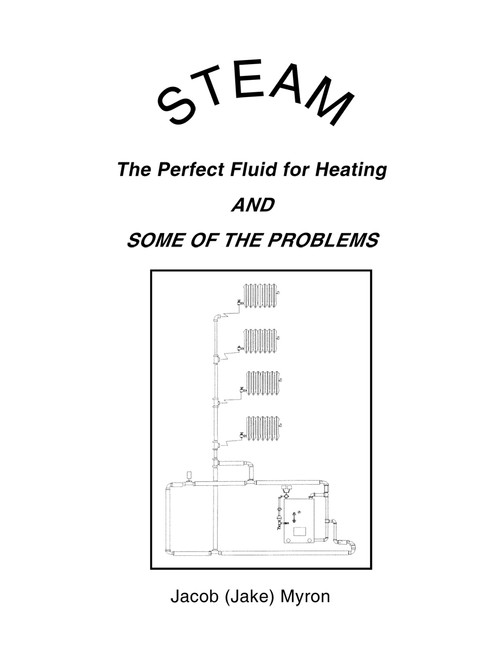 Steam: The Perfect Fluid for Heating and Some of the Problems
by Jacob (Jake) Myron

Jacob (Jake) Myron wrote this book as an easy-to-understand self-help guide for those in the occupation dealing with steam systems. He feels a huge gratitude to this industry, and he shares his over forty years of successful experience in this book to give something back to his beloved profession and colleagues.

Jacob (Jake) Myron's knowledge and expertise in plumbing, heating, water storage systems, underground piping that included water for domestic use, fire suppression, fuel gas, oil tanks and associated piping, waste water, storm water, sewage systems, underground steam and hot water for heating as well as all the associated piping in the low rise and high rise buildings to 40 stories. Jake's education and experience began in the United States Navy and the New York City Housing Authority. Jake began his 26-year career in the housing authority as a plumbers helper, earned his New York City Master Plumbers License. Jake retired as the plumbing section supervisor with a staff of 12 Plumbing supervisors and more than 150 plumbers and helpers serving more than 250,000 tenants in the five Boroughs of New York City.

He wrote and had published two articles for Plumbing Heating and Air Conditioning Magazine, earned the Award of Excellence from the American Institute of Plant Engineers in 1989. What is notable is Jake was a non-engineer competing against the industry's leading engineers. Additionally, Jake taught for four years basic plumbing design and fire suppression at New York City Technical College, the Apartment House Institute division where he earned Instructor of the year award in 1986.

Jake retired his company in 2002 and moved to Boynton Beach, Florida.