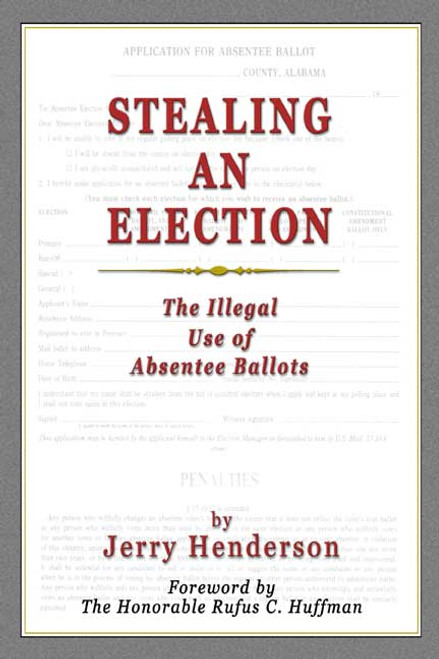 by Jerry Henderson "The most important element of American Democracy is the vote, which energizes our political system and perpetuates our democratic institutions. Any threat to that system must be taken seriously, whether it occurs in Washington, D.C., or a remote county on the plains. We pride ourselves on being a nation in which the political process is open and honest. Jerry Henderson raises some serious questions. Has the absentee ballot, which was designed to expand the number of people who can vote, become an instrument of election fraud? He has opened many eyes to the possibility that elections have been stolen by people who never went to the polls. - Dot Joyce, former Director of Elections Department of State, Florida ABOUT THE AUTHOR Jerry Henderson is a native of Alabama, now living in Africa. He has consulted elections, election administration, and democratic governance in 15 countries: Africa, Europe, Center America and South America. He has consulted for the United Nations (UN), the International Foundation for Electoral Systems (IFES), the Organization for Security and Co-operation in Europe (OSCE) plus other international organizations. He holds two degrees in political science, a Bachelors from Brooklyn College (New York) and a Masters from Atlanta University (Georgia). He is active in both national and international affairs, in particular democracy, governance and human rights. He has served as an elected public official, civil servant, and adjunct professor of political science. In 1984, Jerry Henderson was one of three plaintiffs who filed a successful federal voting rights lawsuit against the Pike County (Alabama) Commission, which challenged the geographic political boundaries of the Commission and other governing bodies within Pike County. He was later elected to the Commission for two consecutive four-year terms. The events set forth in this book occurred in the following primary election. (2005, paperback, 268 pages)
×