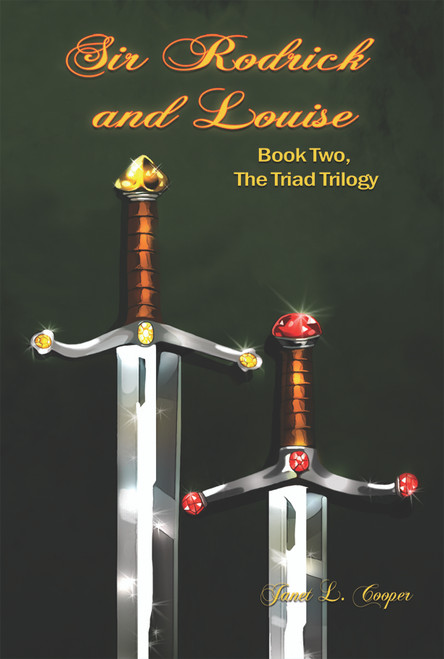 This book, Sir Rodrick and Louise, is the second in the Triad Trilogy. They are the lead characters in this book.

Sir Rodrick was brought back to life from a two hundred and fifty year, or more, bewitched stasis by Jenna. The title character in book one of this trilogy. He is now experiencing an entirely different way of life than he had in his past. Everything is new, exciting and slightly intimidating to the well-trained and well-proven Highland warrior. He is taking his new life bit by bit and taking each day as a new adventure, until he meets Louise. She is the woman of his dreams and rocks his world!

Louise had been widowed ten years before Jenna had contacted her favorite cousin to come to Scotland. Louise is tall, beautiful, smart-alecky and has a sassy mouth. She never realized that going to Scotland to train her cousin’s prized horses, would change her whole life and give her a new one.

The author, Janet L. Cooper, began writing after her retirement at the age of seventy-one, just before she retired. The premise of this trilogy woke her up in the middle of the night out of a dream she was having. It sent her off to her computer to begin writing.

For any of you who may think she is anything like Jenna, as some readers have told her, due to certain similarities you’d be wrong. Jenna empowered herself to follow the dream she had and went to Scotland and by doing so, created a new life for herself. The author only created her and writes about her, but wants her readers to empower themselves to believe in themselves and in the magic of living their dreams, as she did by becoming a writer.

Tracy O.: Loved Jenna. Didn't think I would. Not my usual reading. Can't wait for book 2 in trilogy!

Jan L.: I felt like I was there in the story. Well depicted characters and scenes. When is book 2 coming out?

Tom W.: Kudos on first book! Waded through the character defining of Jenna to the action and loved the premise of

the sword choosing its warrior. Am awaiting second book in the trilogy. I want to find out what happens with Sir Rodrick.

Snowy the Snowman: The Many Colors of Love (PB)

The Complete Human: How to Be Healthy, Happy, and Whole