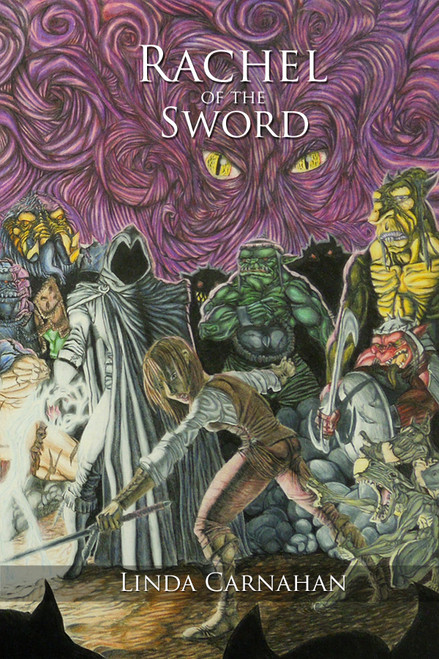 Rachel of the Sword
by Linda Carnahan

Rachel Alice Grayson suddenly wakes up in a different world. Zagrith the daemon witch takes her from the safety of her home in America to Carrines, a mystical place of magic, aelfs, faeries, dwarves, humans, and half-aelfs but she soon finds that the land is constantly threatened by daemons, crazed mutants and monsters. In order to earn her way back home, Zagrith demands she fulfills a mission: she must bring a rusty enchanted sword to the dark mage, a rogue, who is destined to be the Protector of the Universe and if she is successful will defeat the hungry Gothfyl.

She prepares to meet Michael, the dark mage, who has been devoid of emotion since he was a small child. When Rachel arrives, his emotions suddenly return and he blames her for all of his troubles. Rachel must earn his trust to make him believe that he is the rightful one to use the sword or the prophecy regarding the mage will never come true. But a problem arises-the sword is found to be tainted with daemon magic; it is no longer pure. Now, she not only has to deal with Michael's unpredictable behavior, she also has to contend with the people believing that she is a daemon witch that has cast a spell upon Michael to destroy him.

As she rides with Michael and his Black Company to solve the mystery of the sword, Carrines' peace is threatened by the Gothfyl's minions as it tries to stop them. Should they prevent it from breaking through the barrier between its universe and theirs, it will be denied the sweet tasty energy it hungers for.

And as the mages study the life sword and the prophecy, it becomes clear that Rachel's roll in saving their world is more than just giving the sword to Michael. She must get Michael to see the great part his nemesis the daemon lords will play in his destiny. Together they must persuade the races of Carrines to set aside their prejudices to defeat the forces of the Gothfyl.

Linda Carnahan is a retired detention officer of Gila County Sheriffs Office. She is a very active member of the community having been a founding member and first vice chair of the Bullion Plaza Museum and Cultural Center. She is currently working on her second and third cookbook to help fund the museum. Proud of her Celtic heritage, she created the Arizona Cornish Society, put out a Cornish newsletter, and participated in Celtic games in both Tucson and Mesa.