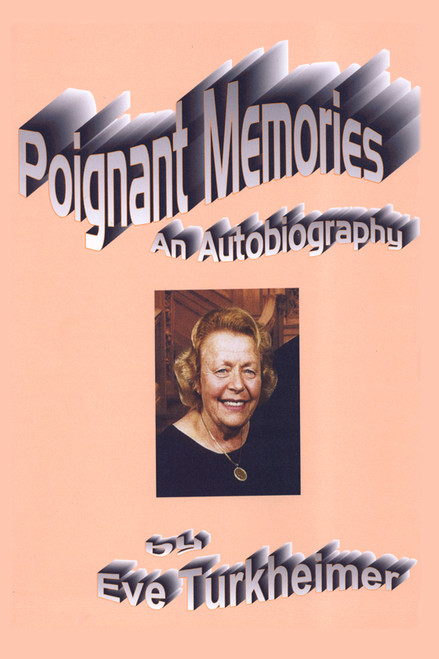 Getting through old age does not only denote the number of years one spent on Earth, but most importantly, it represents a person's countless heartrending reminiscences and how they touch and make a change for others.

Eve Turkheimer, in her book Poignant Memories, retells the most touching memoirs in her more than seventy years of existence. Her experience at age nine, participating in a life-saving Kindertransport to London, allows her to explore the world and other people, including her foster family, who forever became a formative part of her life.

Her encounters with death, illness and pain make Eve a strong-willed and compassionate individual, which inspires her to pass down all she has learned, in addition to her memoirs, to her children, grandchildren and great-grandchildren, as well as a diverse and potentially captive reader audience.

In her life, Eve Turkheimer has overcome many unusual difficulties; yet she has led a charmed life, blessed with goodness and grace from 'above' and, it seems, multiple guardian angels, beginning with the survival of her birth. Her timely escape from Germany's Nazi regime and the Holocaust, as well as her London pre-blitz-bombing departure for America, are suggestive of "some of" Eve's childhood memoirs.

A beautiful, near-magic adventure for Eve, was the act of giving birth to her third child, by hypnosis, and many years later she herself experienced "re-birth", when her surgeon massaged her heart in his hand, before reinserting it into her.

The precious times with Eve's children and later their families, as well as the two men in her life, have created many adventures, much joy, as well as tears and made for a most interesting life.