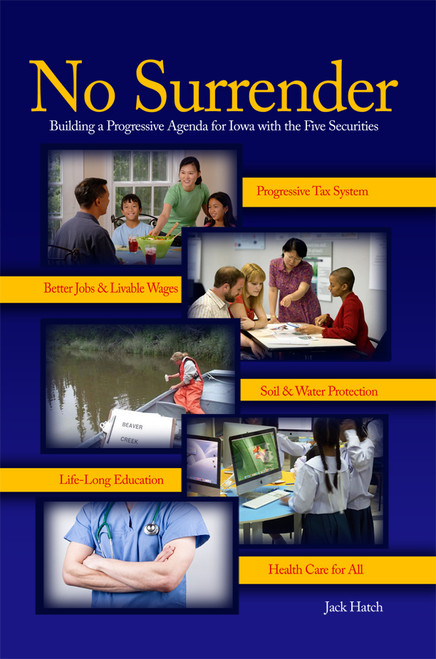 No Surrender: Building a Progressive Agenda for Iowa with the Five Securities
by Jack Hatch

In an era of endless social media carping, the notion of why public service matters may seem quaint or even nave to some. This book is about why, for progressive Democrats, nothing could be further from the truth. Dreaming of ways to improve the human condition for work-a-day Americans and their families is absolutely essential to our purpose and our survival as a political organization. The stakes are always the highest possible ones: the fate of our individual communities and the country we love. And the enemy is always the same: a status quo that tells us not you, not yet, not that way, and not now.

Jack Hatch provides a thought-provoking and challenging look into Iowa's future. His is a call for progressive action. He pulls no punches in calling for a new direction and approach for the Democratic Party if its leaders are to become Iowas leaders. A must read for anyone considering a run for higher office. - Former Governor of Iowa Tom Vilsack

This book is highly revealing. It identifies, without concern of how it affects the feelings of those in power, absolute realities of why Democrats fall short of election goals during each cycle. The narrative represents a path by which the party can return to its historic role of being the voice of the people. And, unlike most, this book is definitive in laying out a plan for success. Jack Hatch has provided a map of the path we must follow. To ignore his challenge to become Progressives will only lead to party oblivion. - Senator Dennis Black, Retired

I am impressed. Without resorting to a rant, Jack Hatch scolds Iowa Democrat leadership for their lack of courage in pressing for bold liberal goals and for surrendering their advocacy for the melting middle class. To his credit, Hatch does not exclude himself from past errors. The Five Security agenda he presents as his bold progressive vision for what Iowa can become is done so with compelling detailed specifics as to mission, process and structure. In fact, were his vision to come to be adopted and funded, I would move back to Iowa. - Dr. Elliot Kline, PH.D Dean and Professor Retired

Jack Hatch, a longtime political activist in the state of Iowa, graduated from Drake University with a bachelors degree and a Masters of Public Administration degree. He served 22 years in the Iowa legislature, chaired a White House Task Force of State Legislators for Health Care Reform, and was the Democratic candidate for governor in 2014. He is a business partner with his wife, Sonja, and they have two daughters, Regan and Caslon.

For Shame, Boone! For Shame, Iowa! The Disappearance of Norma Maynard