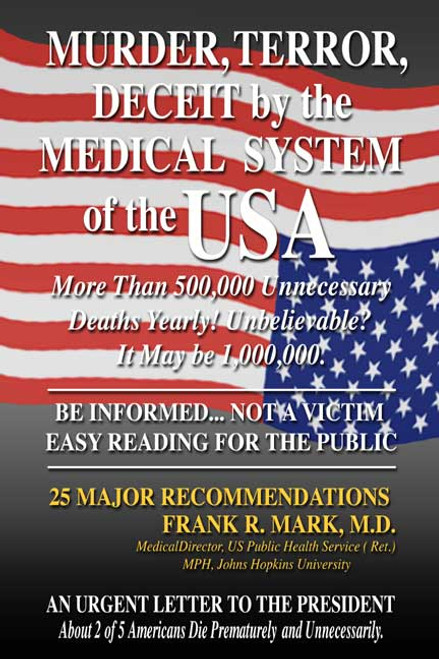 by Frank R. Mark, M.D. Dr. Frank R. Mark displays the injustice of the medical system of the United States in his groundbreaking work, Murder, Terror, Deceit by the Medical System of the USA, which appropriately gives its readers an explanation into the reasons why more than half a million people die prematurely unnecessarily each year in the United States due to the inappropriate behaviors and apathetic actions of the medical system. With twenty-five recommendations from Dr. Mark, he covers many aspects of our medical system, including some of the causes of premature deaths, the definition of medical murder, the scandalous hidden costs of office and hospital visits, devious physicians versus goodhearted, and much more. He stresses that all readers should carefully pay attention to all medically related aspects of their lives in order to maintain healthy, enduring lives in the United States. Dr. Mark believes two out of five Americans die or will die unnecessarily or prematurely. How did it get this way? And what can we do about it? ABOUT THE AUTHOR Frank R. Mark, M.D., received his bachelor of science degree from New York University, his medical degree from the University of Bern, Switzerland, and his master of public health degree from John Hopkins University. He has four daughters, all of whom are active in the study of medicine: Linda, Laura, Louise, and Lynette. His other interests include history, archaeology, art, Prevlab (Prevention of Loneliness, Anxiety, Boredom), coaching tennis, collecting African artifacts, learning different languages and, of course, all current and future aspects of medicine. He has written one major chapter in an encyclopedia of medical engineering, Medical Management and the Hospital. (2006, paperback, 208 pages)
×