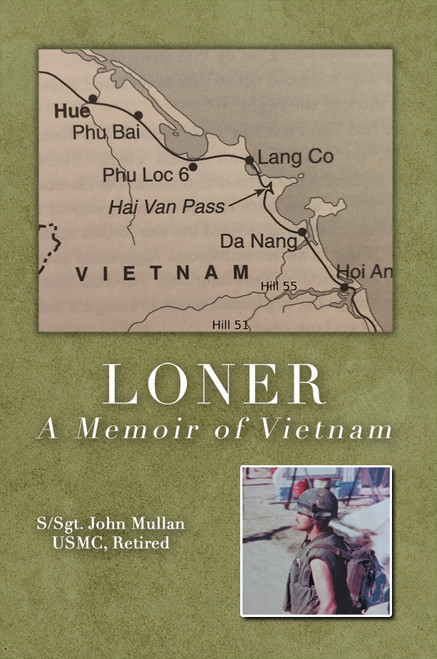 Loner is a personal memoir of one man’s experience in South Vietnam and the aftermath of serious injury. Told with authentic detail, humor, and pathos, it is the story of an ordinary grunt in an extraordinary situation. From the danger of patrols with Charlie Company, One Five, to the nightmare of the screaming wards of Philadelphia Naval Hospital, this is a fascinating glimpse of a typical Marine’s life in wartime and an intense inside view of a survivor’s recovery. Spanning only eighteen months but taking over thirty years to write, this is a memorable account of how it was for Staff Sergeant John Mullan.

John Mullan was born in Detroit, Michigan, saw his first parade on VE Day in 1945, and decided to become a Marine when he was ten years old. With a family move, he entered a new school and quickly learned how to be a loner—to be alone and make it on his own. He joined the Marine Corps at age seventeen, met his future wife on his first leave home, and married three years later. After a variety of assignments, he landed the perfect position of recruiter back home. Orders for Vietnam in 1967 resulted in five months of battle experience, three Purple Hearts, and severe injuries including brain damage which required many years of recovery. John considers being retired from the Marine Corps to be the single worst event in his life, but he put his life back together. After completing college, he held a position with the U.S. Post Office for over twenty years and raised four children with his wife Catherine. Awarded the Bronze Star with combat V, John remains devoted to the Marine Corps.