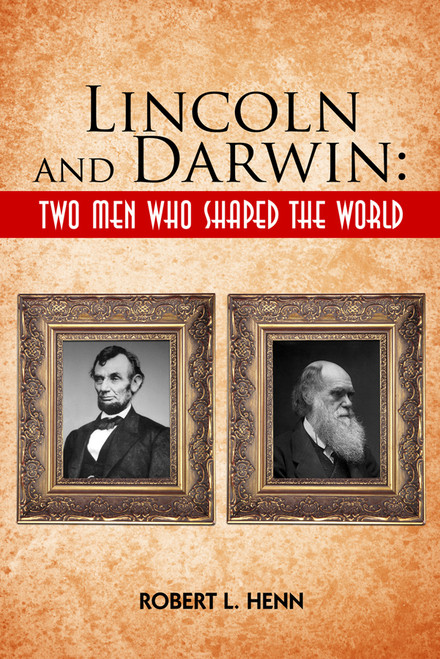 Lincoln and Darwin: Two Men Who Shaped the World
by Robert L. Henn

Abraham Lincoln and Charles Darwin, although worlds apart, were both born on February 12, 1809. Who can believe that two men who share the same birthdate, yet never met each other, could be so similar in so many ways? They had an unquenchable thirst for knowledge and possessed incredibly high capacities of memory and recall. They both had high degrees of self-confidence and, against many odds, persisted with their insightful ideas to understand and explain their respective worlds. As a result, they were two of the most influential, yet controversial, men of their time.

Lincoln and Darwin chronicles the lives of these two historic men by answering the intriguing questions of what was each doing throughout the nineteenth century. What was Lincoln doing while Darwin was sailing on board the HMS Beagle? What was Darwin doing as Lincoln was giving his Gettysburg Address? What was Lincoln doing when Darwin published his Origin of the Species? What was Darwin doing the night Lincoln was assassinated in Fords Theater?

The lives of these historical figures, who seem so contemporary, provide a fascinating story.

Robert Henn, a native and lifelong resident of Ohio, graduated from Otterbein College with a bachelors degree in biology. He earned graduate degrees in education from Baylor University and Miami University. A biology teacher of thirty-six years, he is currently Professor (Ret.) of Biology at Sinclair Community College and volunteers as Curator of the Herbarium at the Aullwood Audubon Center and Farm.

Robert Henn is married and the father of three adult children. He enjoys nature photography and Civil War stories. He is also the author of Wildflowers of Ohio. His career-long interest and fascination with the lives of Abraham Lincoln and Charles Darwin prompted him to write Lincoln and Darwin: Two Men Who Shaped the World.