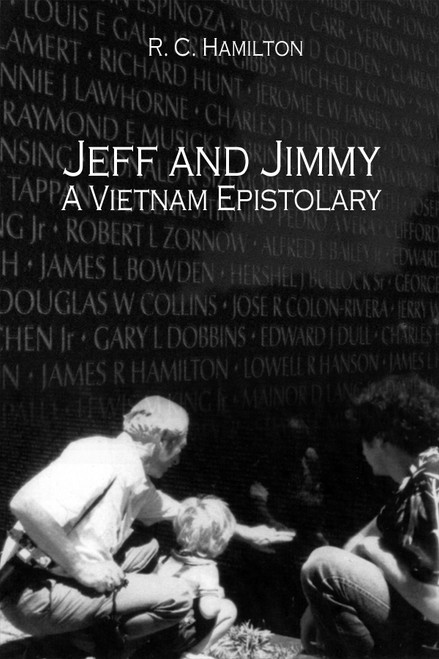 Jeff and Jimmy- A Vietnam Epistolary
by R. C. Hamilton

With the multitude of writings about Vietnam, most of which are now probably confined to the cobweb and the dustbin of forgottenness, we thought we have known the last of them.

Yet, the story of Jeff Hamilton and Jim Ackerman weaves an irresistible aura about it, a stirring essence that defies all that we believe we already know about Nam.

Jeff and Jim are town matesfrom Mansfield, Ohiowho find themselves thrown in the same platoon at Vietnam, Jeff as the platoon leader, and Jim his radio operator. On a tour of duty on March 22, 1968, both will face invisible enemies who will force them to act in a way that will forever make their mark in the minds of those who know them.

At first, what transpired on that day would appear to be as enigmatic to friends and families as the whole episode of Vietnam itself. The details, when they finally become known, appear to be as emblematic as to be what Vietnam is really all about.

R.C. Hamilton worked for over thirty years in an academic library in western Pennsylvania. During that time, he and his wife and son lived on a family farm and raised Scottish Highland Cattle in a Minor Breeds conservancy program. He was also a multi-instrumentalist and performer in a Scottish/Irish Traditional folk music band, ARAN, was a distance runner and sometime triathlon participant. His work has appeared in the O. Henry Awards short stories anthologies, the Antioch Review, Confrontation Magazine, Tropic magazine, Country Journal, Running Times; he was a regular freelance contributor to Westsylvania magazine and numerous other publications. He has won the Golden Quill Award for nonfiction (sports category) and has twice won the Westmoreland Award for poetry, and also the same award for fiction. He is now retired. He and his wife live in Alamogordo, New Mexico, which has over 300 sun days each year, and where he continues to practice the Irish bouzouki, button accordion, penny whistle and guitar and still tries to improve his techniquewhich is a perpetual labor of love. This is his second published book of narrative nonfiction.