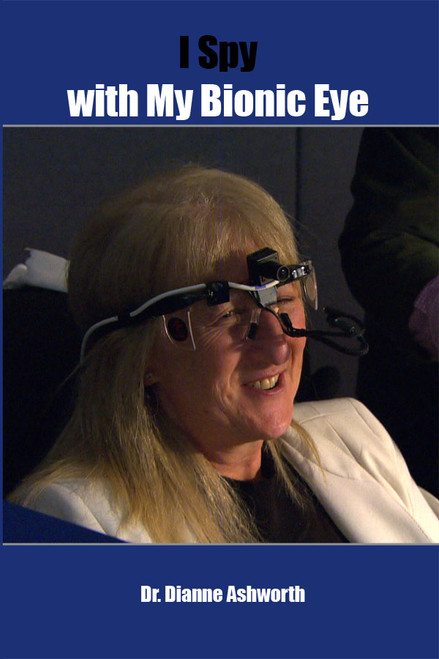 I Spy with My Bionic Eye
by Dr. Dianne Ashworth

Dr. Dianne Ashworth's I Spy with My Bionic Eye is an enlightening and uplifting 'real life' story of a woman's journey, beginning with childhood when she was diagnosed as being myopic, or short-sighted; required to wear eyeglasses with 'coke bottle' lenses, she was alienated from other kids, which crushed her self-esteem. As she grew, she became more creative in dealing not only with her poor vision, but her vision of the world, as well.

In her early adult years, she was dealt a blow with a new diagnosis of retinitis pigmentosa, which meant she would soon lose her sight. Dr. Ashworth shares her amazing story as she forged ahead to make a life for her family as a single mother, and later became the first participant in a one-of-a-kind prototype bionic eye clinical trial in her homeland of Australia in May 2012. Although the results of this trial thus far have been incredible, there is much more work to be done. Let us all hope that funding becomes available to continue the outstanding work of all those involved.

A lifelong resident of Australia, the author was born with very poor vision. It wasn't until after she had her first child that she was diagnosed with retinitis pigmentosa and by the time she had her second son, her vision had diminished to the point where she could only differentiate between light and dark. While this was devastating at first, she now had two young sons to provide for as a single mom.

She went back to school, earning a B.S. in Social Work and then went on to receive a Ph.D. While studying, she was also either working or volunteering. During the latter years of her study, she received an invitation from Bionic Vision Australia and became the first recipient of an Australian prototype bionic eye device. At this writing, research continues.

I Want to Help: My Story about Cancer, Depression, and God