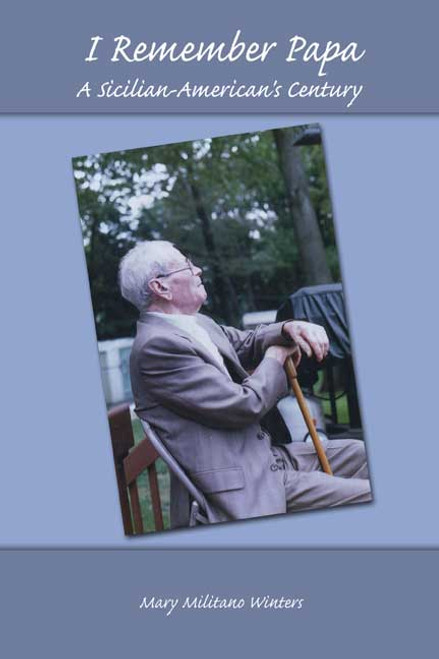 by Mary Militano Winters I Remember Papa is the story of Sicilian-American immigrants to the United States who endured some of the most tumultuous years of U.S. history. From the Great Depression through World War II, the sights, smells, and sounds of a Sicilian-American enclave in New Jersey come alive in the era of the trolley car and comedy radio shows. With the words of the song Brother, Can You Spare a Dime? ringing in his ears, future centenarian Jimmy Accardo experienced the irony of unemployment in the land of opportunity during the Depression, only to recover in time to see his only son and two sons-in-law go off to war. Throughout, the sounds of mandolin music playing in the streets, the sight of the family performing the tarantella dance at backyard parties, and the smell of meatballs, sausage, and gravy are part of the one set of constants on which he could count. ABOUT THE AUTHOR As Mamma and Papas third child, you might say I am a survivor in my own right. My first husband, Joe, a Union, New Jersey, firefighter, died in 1979. When my children began to arrange a small Christmas tree the year of Joes death, Papa noticed all the lights and decorations were blue. So he asked, Arent you blue enough? With that Joe Jr. went out and purchased a freshly cut tree with new decorations. Surrounded by my three children and two grandchildren, Richards daughters, Marcy and Lauren, I forged ahead and celebrated Christmas once again. Nearly eight years after Joes death, I fell in love for a second time, with a fellow with a formidable presence named Jack Winters, who served as State Deputy of the Knights of Columbus in New Jersey. Papa would ask when the marriage would be. It was Papas way of granting his approval. Joe Jr.s children, Jacqueline and Alexandra, who never met their biological grandfather, would lovingly call Jack Winters Papa Jack. When Papa Jack died in 1996, I still had a growing family of my own. Today I am the matriarch of an extended family that includes Mary Jane; her husband, Mike; and their two children, John Michael and Brendan; Josephs wife, Debra; and their daughters, Jacqueline and Alexandra; and Richard; his wife, Connie; and Richards daughters, Marcy and Lauren. My own philosophy of longevity is simple and sweet. My children are my jewels. Money means nothing. I am grateful to the Lord for giving me two wonderful men with whom Ive shared my life. (2007, paperback, 102 pages)
×

Vacation Under the Sicilian Sun - eBook