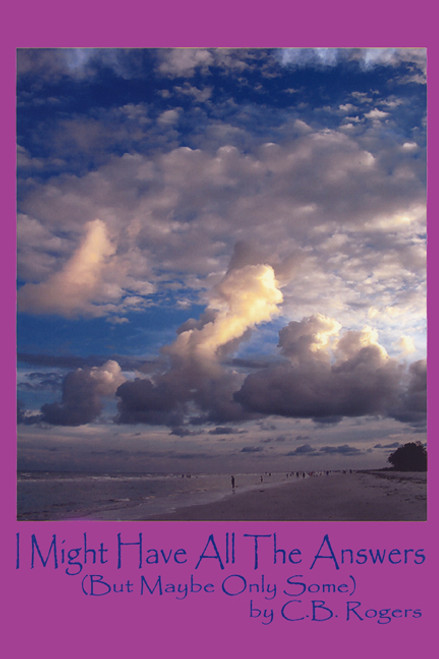 This small collection of original aphorisms, thoughts, ideas, and beliefs are set down in thought-provoking, witty, and often humorous observations of life. If you could see the whole picture at one glance, it would have no further value. Take the time to read this little gem slowly, enjoying and savoring each thoughtA good book is never finished; a poor one will have an ending.

C. B. Rogers took his first train trip at age fourteen, and he has been a sojourner ever since. Born in Jackson, Michigan, and currently living in Fort Myers, Florida, he has been a Marine, an employee of Delta Airlines, a groundskeeper and landscape gardener; he has traveled around the world twice, bicycled the perimeter of the United States and Canada, and taken many hitchhiking trips in the United States and Europe. As he says, I had a lot of time to think.

After suffering a cerebellar ataxia in 1992 and a stroke in 1996, he has been confined to a wheelchair, but it has not confined his life or his attitudes. He is currently at work on another book.

Tiller is a graduate of the Art Institute of Philadelphia. He started his career doing magazine illustrations, and later went back to teach at the Art Institute. After being diagnosed with Multiple Sclerosis, his creative spirit did not waver. He now enjoys adding to his photo collection, occasionally drawing, and using the computer to bring to life his creations.

Rogers and Allen are both members of the St. John the Apostle Metropolitan Community Church.

I Love To Go Camping - eBook

I Hurt Like Hell: We Have All Heard of Fibromyalgia, Now Hear It from Someone Who Lives It Every Day

I Messed Up, But the Church Let Me Down - eBook