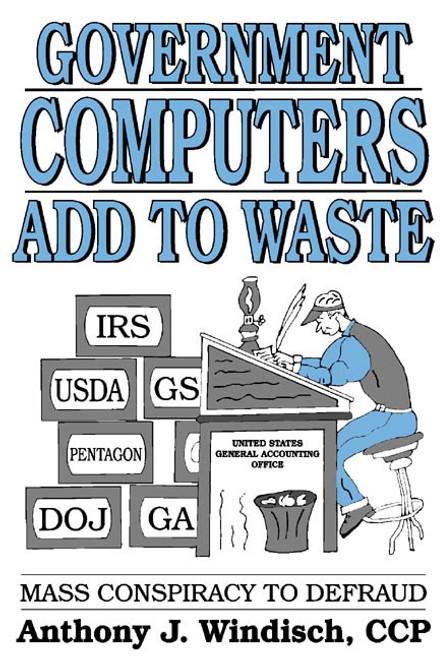 by Anthony J. Windisch, CCP We have all seen it: the picture of the president next to a sign which proudly states a zero federal deficit. We all feel a little better. Sure, more and more of our paychecks are being eaten by the tax monster, but if it helps the country and the economy...fine. However, the truth is: It means hundreds of dollars spent on a haircut or a toilet seat; our hard earned money wasted away on over-inflated prices and government inefficiency. And what is even more infuriating is the information on federal waste and negligence which the government does not want us to know. Anthony J. Windisch, CCP, has witnessed and experienced these problems first hand. While working for the Department of Agriculture, he was astounded by the problems the government created and the almost trillion dollars they wasted on failed attempts to develop efficient and reliable computer systems and controls in response to the Paperwork Reduction Act of 1980. From the government accounting workers who fought the placement of computers for fear of their jobs to the bureaucrats who turned a blind eye to the problems facing the federal government, Windisch details it all in Government Computers Add to Waste: Mass Conspiracy to Defraud. Citizens will be shocked to learn the truth, the whole truth, and nothing but the truth about where our tax monies go and how much more we could keep in our pockets if it wer not for the irresponsibility and witlessness of the gigantic government machine. All concerned tax payers must learn the inside story by reading Windisch's Government Computers Add to Waste. ABOUT THE AUTHOR Anthony J. Windisch, CCP, is a certified computing professional (CCP). For more than thirty years, he has worked in managing, supervising, and designing computer-automated systems. He has been manager of computer financial systems for a large private company and has worked for the federal government, beginning in 1982. He retired from the federal government in 1991 and is now self-employed. Windisch was born in St. Louis, Missouri, and has continued to live there his entire life. He shares his life with his wife, Dorothy, and his seven children: Nancy, Patricia, Janet, Sandra, Cynthia, Robert, and Regina and nineteen grandchildren. In his spare time, Windisch enjoys designing electronic games and attending sporting events.
×