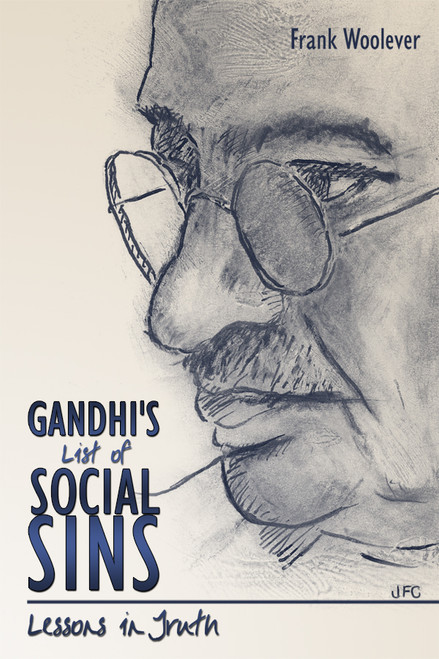 Wealth without work, pleasure without conscience, commerce without morality, science without humanity - these are among the social sins that Gandhi identified as contributing to the colonial oppression of India. His work left a legacy that continues to this day.

Indian Poet Rabindranath Tagore dubbed Mohandas Gandhi, his real name, a Mahatma or Great Soul. Common people as well as politicians accepted this title for Gandhi because his teachings, beliefs, and self-sacrifice were perceived as life changing. As a preeminent social, political and spiritual leader, he addressed racial inequality in South Africa before endeavoring to seek unity between Hindus and Muslims in India.

In Gandhis List of Social Sins: Lessons in Truth, author Frank Woolever introduces and discusses Gandhis thought and action for the common good. Gandhi was known for his appeal for nonviolence in the world, as well as the rule of truth and honesty in each individuals life. He resorted to prolonged fasting and days of silence to address social and political issues he deemed critical for all.

Prominent peacemakers who became his imitators and embraced his vision include Salvadoran Archbishop Oscar Romero and Martin Luther King, Jr., both religious leaders who were assassinated for standing up against injustice.

Gandhis printing presses and publications became an important conduit for spreading his ideas to millions worldwide, just as Frank Woolever found the power of the printed word a useful tool in addressing inequality and non-violent solutions to conflict. This book describes them both.

Frank Woolever was born in Syracuse, New York, where he lived most of his life.

Woolever committed his life to being a peacemaker and was a consummate community organizer. He advocated tirelessly for disadvantaged people and at the same time challenged social systems that foster poverty.

Woolever earned a Master of Divinity at St. Bernards Seminary, Rochester, New York, a Master of Public Administration from Syracuse University, and a Doctor of Ministry at Colgate-Rochester Divinity School. He was a certified Fellow of the American Association of Pastoral Counselors.

Woolever died in 2010 and is survived by his wife Meme Woolever and daughters Heidi Woolever Daly and Amy Woolever.

Geographical Origin of Language: The End of Place Name Mystery

From Moscow with Love

From Poverty to Purpose