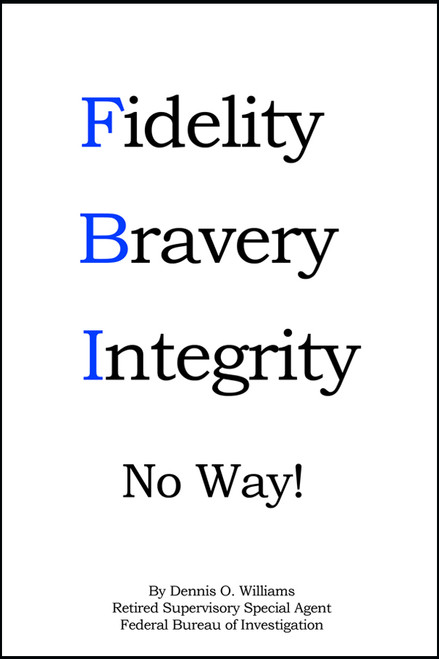 In 1979 FBI Supervisory Special Agent Dennis O. Williams moved across the country when he was promoted from the FBIs Los Angeles Division to a supervisory position at FBI Headquarters. Soon after his arrival, Williams discovered that the mover had defrauded the FBI by billing for a higher weight of his household goods than actually existed. As Williams pursued the matter, he discovered a cover-up at FBI HQ; his attempts to expose this conspiracy resulted in his receiving threats and becoming the subject of retaliation. Though an investigation by the FBI Washington Field Office demonstrated that Williams was correct in his suspicions, the cover-ups continued for decades, eventually leading to a conspiracy to deceive the Senate Judiciary Committee regarding an inquiry into the involvement of Thomas J. Pickard.

Pickard was the acting director of the FBI when 9/11 occurred, despite Williams repeated warnings to the White House that Pickard did not have the integrity for such a position. The 9/11 Commission report reflects that the Phoenix Division of the FBI produced a memorandum dated July 10, 2001, advising FBI HQ that an inordinate number of supporters of Osama Bin Laden had attended civil aviation universities and colleges and would be in a position to conduct terror activity against civil aviation targets. Williams believes that Pickards testimony that no managers at FBI headquarters saw the Phoenix memo before September 11 constitutes a red flag indicating a conspiracy to defraud the 9/11 Commission.

In Fidelity Bravery Integrity No Way! Williams recounts his dealings with corruption in the FBI and warns of the danger of such corruption and the necessity for stringent congressional oversight of those whom we trust to protect our nation.

Joining the FBI as a Special Agent in 1970, Williams repeatedly received commendations for his high conviction rates and exposure of fraud against the government. In 1979, because of his scientific background, he was promoted to a supervisory position in the Engineering Section at FBI Headquarters.

Currently working as a private investigator, Williams lives with his wife in Utah.