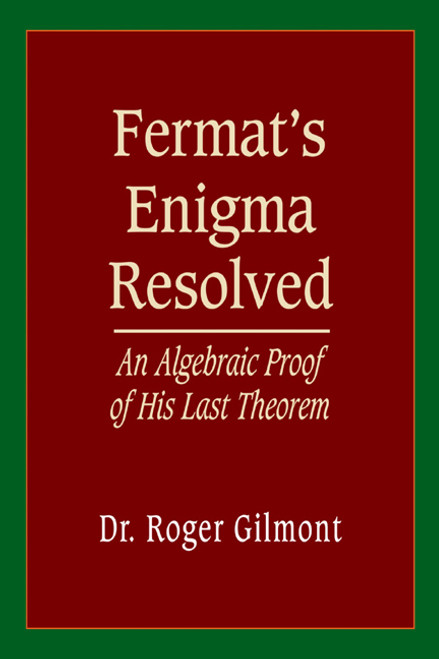 by Dr. Roger Gilmont Fermats Enigma Resolved: An Algebraic Proof of His Last Theorem vindicates Pierre de Fermat by arguing that the brilliant amateur mathematician did have the proof of his last theorem, as he claimed when he presented the theorem circa 1637. Although his actually proof may never be known, the presentation of a relatively simple by paradoxical algebraic proof shows that, whatever his proof may have been, it could have been done using the mathematics of his time. Dr. Roger Gilmont has expanded the algebraic proof into a text appropriate for students and teachers with a moderate command of algebra and offers a clear and decisive explication in Fermats Enigma Resolved: An Algebraic Proof of His Last Theorem. ABOUT THE AUTHOR Dr. Roger Gilmont is a graduate of Brooklyn Technical High School, Cooper Union Night School of Engineering, and Brooklyn Polytechnic Institute, later known as Polytechnic University of New York, from where he retired as professor of thermodynamics and is a fellow of the university. A chemical engineer with advanced mathematical training, he is the retired former president of Gilmont Instruments, a manufacturer of precision laboratory instruments. He has written over fifty scientific papers and received over thirty U.S. patents. Dr. Gilmont is also the author of the textbook Thermodynamic Principles for Chemical Engineers. (2005, paperback, 58 pages)
×