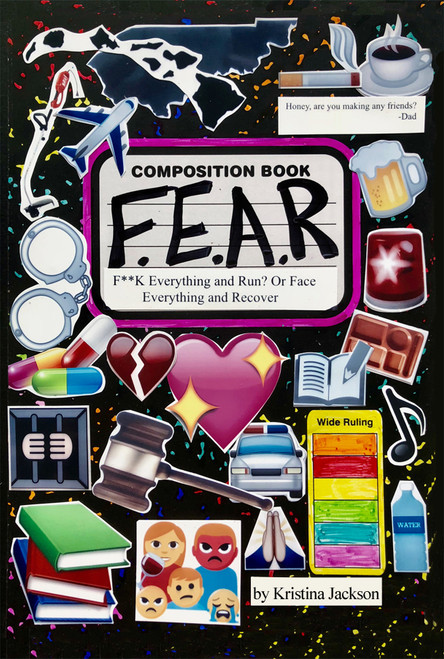 F.E.A.R. is author Kristina Jackson’s story spanning twenty-five years of alcoholism, addiction, and incarceration and how she survived through it all. It is a story of hope and how to break free. Jackson’s message is that if someone as completely broken and desperate as her can hit bottom and move on to live a good, healthy life, then anyone can! Kristina Jackson was inspired to write this story by her friend and sponsor who knows she loves to write.

Kristina Jackson grew up in Charlottesville, Virginia. She left home at the age of sixteen and eventually wound up in Hawaii. Now, she lives in Maui, Hawaii, in a small, very community-oriented town called Kihei. It is on the southwest shore, known for its beautiful beaches and perfect weather. She lives with her boyfriend, two dogs, and three cats. Her little dog Gracie goes everywhere with her, even to work! She works for a wedding company as a wedding coordinator and officiant. She plans weddings by day and performs them on the beach at sunset.

Jackson has a very tight-knit circle of friends who are constantly dashing in and out of her home. They spend time talking while drinking gallons of coffee, laughing, crying, and sharing their personal journeys with one another. All are welcome on “Kris’s Pergola.” Most of her spare time is spent reading with her boyfriend, mostly crime novels, the occasional memoir if the story takes place in the south. Jackson writes daily in her journal as well, and on weekends she works on her blog.

The AA community of which author Kristina Jackson is a part is of the utmost importance to her. She stays in service and keeps her sobriety a priority. Jackson is the liaison between AA and the county jail, and she brings meetings into the women inside it.

Kristina Jackson had no intention initially of writing a book. She used to write short stories about her time in prison for her sponsor in order to deal with the memories. She would yell out, “That’s a chapter!” After several years, Jackson finally got sick of it and started to compile the stories into something bigger, and eventually, F.E.A.R. was born.

Every day, Kristina Jackson is grateful for her sobriety, and for the people who have contributed to the life she has today.

God Gave Me a Miracle to Share with You!