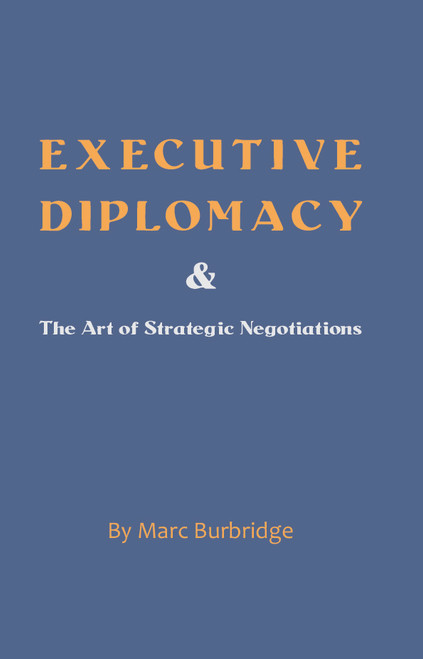 What does it take for a manager or executive to be something more than just another in the myriad of those who make up corporate leadership, or for a corporate culture to be more than just one more “follow-me”? This book provides a new, fresh look at how things can be, and it does so by simple taking a few lessons from the ancient art of diplomacy and applying them to the Executive Diplomat and a corporate culture described as Executive Diplomacy.

Typically, corporate executives are taught and encouraged to be assertive, bordering on aggressive, and so they often are. They do so without realizing that one can easily be assertive while failing to be effective. In the same manner, they celebrate the signing of a contract while ignoring that the objective is not the signing of the contract, but rather its effective implementation. Often their bonus blinds them from the value of a more diplomatic approach, a more lucrative one.

We invite the reader to step beyond yesterday and explore something new and innovative where empowered executive alignment opens the pathway to a more meaningful corporate culture and better results in high-value, strategic negotiations in the new reality. We suggest you start with the Preface of this book, or by visiting www.executivediplomacy.org.

Marc Burbridge began his academic studies at the University of Sydney in Australia, followed by studies in diplomacy at the American University School of International Service, Washington D.C., where he graduated and completed his Masters in Economics. He continued at American University as a Research Associate authoring two of the US Army Country Handbooks, on Ghana and Venezuela. He later specialized in applied operations research for the costing of major transportation and military systems traveling widely in Asia, Europe, and Brazil. He assumed the position of Brazil Country Manager in Rio de Janeiro for SYSTAN International and later General Manager for Industrial Automation in Brazil’s largest private industrial group. He participated in the planning of Brazil’s national highway system and privatization of Brazil’s national telephone company. He studied negotiating at the Harvard Project on Negotiations and taught negotiation skills at the Rotman School of Business, University of Toronto, and at Brazil’s leading business university, the Getúlio Vargas Foundation. He currently acts as a consultant, mentor and negotiator in M&A and strategic business ventures.