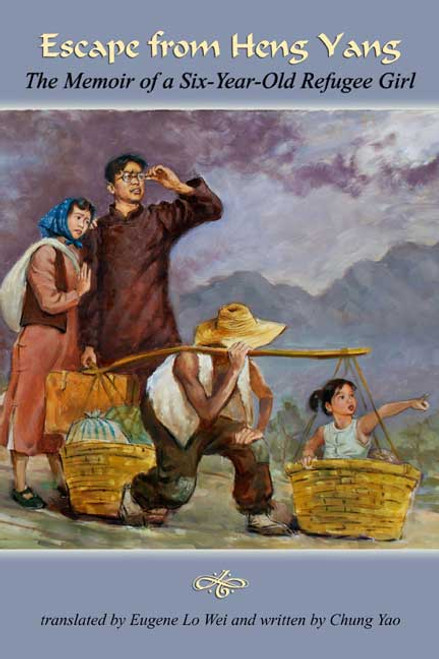 Translated by Eugene Lo Wei and Written by Chung Yao Escape from Heng Yang: The Memoir of a Six-Year-Old Refugee Girl is a reminiscence that provides the reader with insight into the Japanese invasion and occupation of China during WWII. It is the autobiographical story of Chung Yao who, with her two brothers and their parents, faced much adversity as they traveled from their home in Heng Yang to the distant Chongqing. Ironically, when they reach Chongqing after a long and perilous journey, the enemy is conceding defeat and China has won the war. In Chinese tradition, Chung Yaos professor father was socially ranked higher than merchants, laborers, or peasants because he was a scholar. That this family, unused to privation and manual labor, with three small children, could survive the arduous and hazardous journey described is a testament to the human spirit. The children walked, rode in baskets, rode on horseback, and rode on extremely crowded trains while their parents had to sell all of their possessions and earn money at unfamiliar activities from cooking yams to sell to acting in a play about yam selling, and ultimately the family had to depend on the kindness of strangers. Through all of these adventures, the reader learns of one Chinese familys point of view of WWII rarely seen in the English language. ABOUT THE AUTHOR Eugene Lo Wei was born in LeShan, China, during the war against Japanese invasion. His parents had to escape from Nanjing just prior to the Rape of Nanjing holocaust in 1937, three years before Eugene was born. Eugene came to Chicago, Illinois, with his parents when he was eighteen, freshly graduated from high school. He later graduated from the University of Illinois with honors in chemistry and again from MIT with a masters degree. After four more years at the University of Colorado in Boulder, Eugene taught college chemistry for six years before working in the water treatment industry. He joined the Alliance for Preserving the Truth of Sino-Japanese War (APTSJW) in 1993. In 2002 he founded the American Museum of Asian Holocaust WWII in Falls Creek, Pennsylvania. He is currently married to Amy Dongmei Hu from China. (2008, paperback, 122 pages)
×

Escape from the Asylum

Escape from the Asylum

Eros Left Behind: A Collection of Poetry