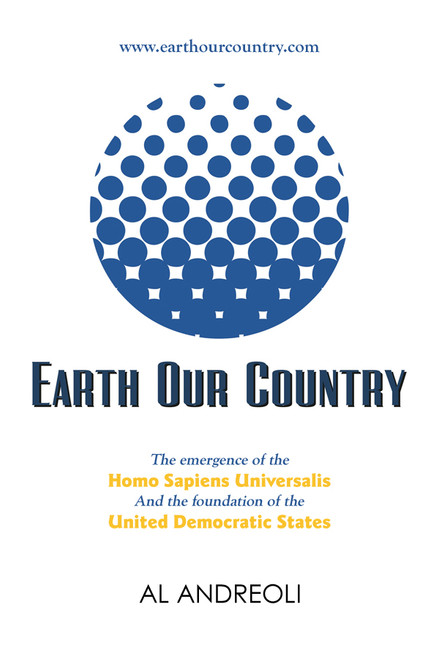 Earth Our Country
by Al Andreoli

Our Worlds political fragmentation is turning obsolete. The countries anarchy prevents us to countinue to flourish and ultimately succeed to build a truly liberal, sustainable and humanistic society, while the ecologic wall stands in front of us.

Our civilization is now in the middle of a bridge, hesitant of which way to go, back to the nations and protectionism, or straight toward the unknown of Universalism?

Earth Our Country takes us through the journey of building a truly holistic universal society: The United Democratic States. It calls for Barack Obama to run for first global president and Hillary Clinton to lead his global think tank their program is included.

The realization of the unity of Mankind in the making is a journey and most will start this discovery with a condescending roll of their eyes. Join us with no taboo and switch on your curiosity. We propose a way to pass the great wall of the complete and sustainable globalization, so that we become the first generation of the Homo Sapiens Universalis.

Al Andreoli is a veteran international technology executive. He has traveled, worked and lived in a number of countries around the World, leading American, Asian and European organizations. He is a liberal who praises global capitalism as a tool to serve Mankinds progress. However, he is convinced that pure global market economy needs the mirror of a global and democratic political governance to resist protectionism.

Our Earth Has a Voice