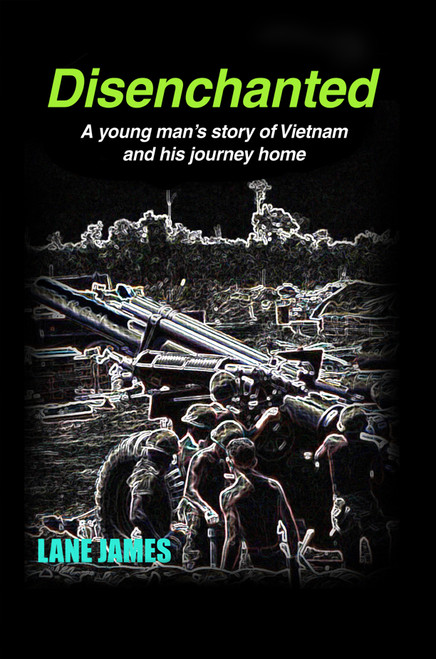 A young man’s story of Vietnam and his journey home

Disenchanted: A young man’s story of Vietnam and his journey home is the autobiography of Lane James. In 1969, at the age of nineteen, he was on a plane to Vietnam. At that point in his life, James had already experienced plenty of hardship. Growing up poor in Seattle required him to work hard and learn to take care of himself. His life changed forever when he was drafted into military service and joined the U.S. Army. From there, life became full of friendship, adventure, and danger.

Both funny and educational, Disenchanted is full of personal stories about the daily life, struggles, highs, and lows of his life in combat in Vietnam. James gives readers an intimate look into scenes of peril in the midst of warfare as he and his fellow soldiers fought for their country and for their own survival. He describes the challenges of adjusting to civilian life after the war and his battle with PTSD and offers helpful commentary on the current support for veterans and the need to continue to improve efforts to support those who have served.

Lane James was born in Seattle, Washington, and grew up in the Magnolia and Queen Anne districts. After his military service, James went on to own three mall retail stores in Seattle, selling everything from furniture to t-shirts. In 1995, he developed www.onthefield.com, which has had great success over the years. Located directly across from Century Link Stadium, home of the Seattle Seahawks professional football team, it sells online and in-the-store merchandise for the Seahawks, Seattle Mariners, and Seattle Sounders and as a seller on Amazon.com.

James is an avid golfer who helped run the Silver Swan Golf Tournament for thirty-eight years. He has been married for over forty years to Laura. Together they play and sing in the Lane James Band at the Hard Rock Café to raise money and awareness for PTSD. They also have a great joy in 2 new granddaughters, Mariana and Mya. Lane and Laura live in a quiet little town in Washington.

Black Sheep of the Family

DO YOU KNOW WHERE YOU’RE GOING?