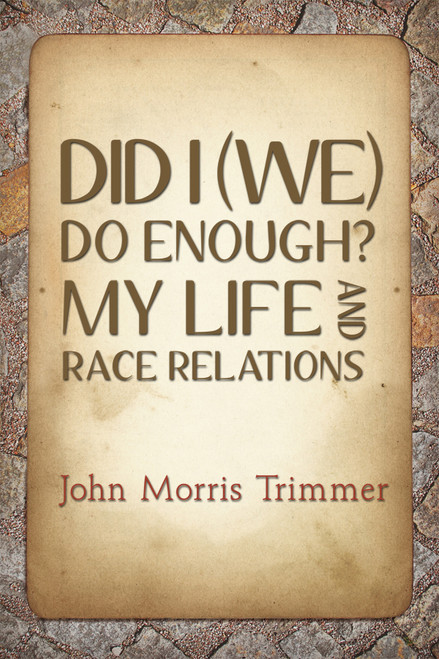 DID I (WE) DO ENOUGH? MY LIFE AND RACE RELATIONS
by John Trimmer

John Morris Trimmer was no stranger of seeing a people of different color as he mingled with different races when lived in China with his family as a young boy before the Second World War. His family was a part of foreign missionaries serving the poor in China, his father being a doctor. He wasnt aware either of the racial discrimination happening in America, until his family went back home and he began attending schools.

From then on, he became a witness to many accounts showing racial prejudice against the blacks in school and other institution of learning, in the military, at work, in the community, in the church, and in many other social and political grounds. In the 1960s, he is one the staunchest supporters of civil rights acts, and has been an active participant in many public demonstrations. His decades of meaningful friendship with blacks and his efforts to break the barrier between the whites and the blacks resulted in a collection of stories that is both inspiring and heartbreaking.

As he gathers back the memories of racial inequities he has seen firsthand, he ponders over what is really wrong in American society today and tries to answer the riddle of not only the gap between two races but also the widening gap between the rich and the poor.

John Morris Trimmer was born to American missionaries in Nanjing, China, where he lived for fifteen years. He received his bachelors degree from Swarthmore College and his masters from the University of Florida; he also recieved his Doctors from the Western Colorado University. He is now a college professor emeritus and currently lives in Florida with his wife, Guiying Ling.

Where Did My Tonsils Go?