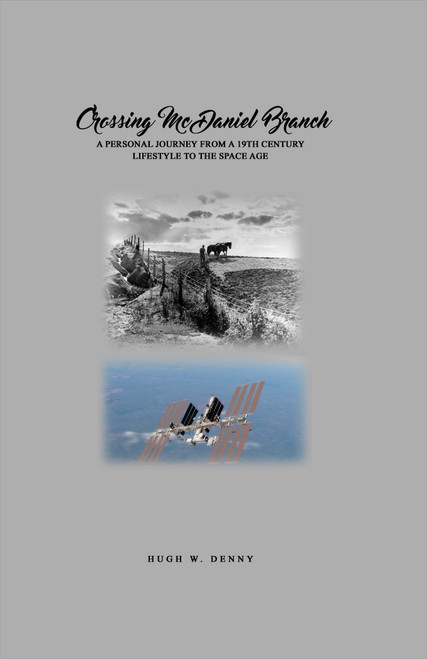 In 1938, Hugh W. Denny was born into a log house without electricity. Eighty years later, he wrote his memoir on a laptop. Crossing McDaniel Branch is a memoir celebrating his and his family lives, but also shows how rural nineteenth century America made possible the technological wonders of the twenty-first.

As a child, Denny dusted tobacco crops with arsenate of lead, hulled walnuts for money, and walked to school through sleet and floods. His vivid details capture the rhythms of rural life. He attended Tennessee Polytechnic Institute for electrical engineering and worked his entire career at Georgia Tech Research Institute. He had papers published in technical journals and at symposiums, did research for NASA, and attended conferences in India.

With colorful family stories of an uncle running moonshine, the activities of great-grandparents during the Civil War, and the poems of his grandmother, Crossing McDaniel Branch is a warm and personal look at the past.

Growing up, Hugh W. Denny farmed tobacco and corn with mules, milked cows and slaughtered pigs, and spent most of his education in a one-teacher schoolhouse. In high school he was active in interscholastic debate and finished at the top of his class. He earned an MS in electrical engineering at Georgia Tech. After four years of Army ROTC, he graduated with highest distinction and served as a second lieutenant during the Berlin Wall and Cuban Missile Crisis.

During his 35 years at the Georgia Tech Research Institution, Denny helped improve the reliability of the Department of Defense and NASA. He was active in the Institute of Electrical and Electronic Engineers and was twice elected to the Board of Directors of Electromagnetic Compatibility Society, served as the Secretary of EMCS’ Standards Committee, and served as Treasurer and Chair of the EMCS’ International Symposia. He has written one technical book, authored 35 refereed papers, and was the principal author or major contributor to 57 reports. He also has four patents.

Denny is married to Marguerite Ann Leahey. They have two daughters and three grandsons. Denny wrote Crossing McDaniel Branch for his grandsons. Now retired, he enjoys his daughters, dotes on his grandsons, and grows azaleas, rhododendrons, and camellias.