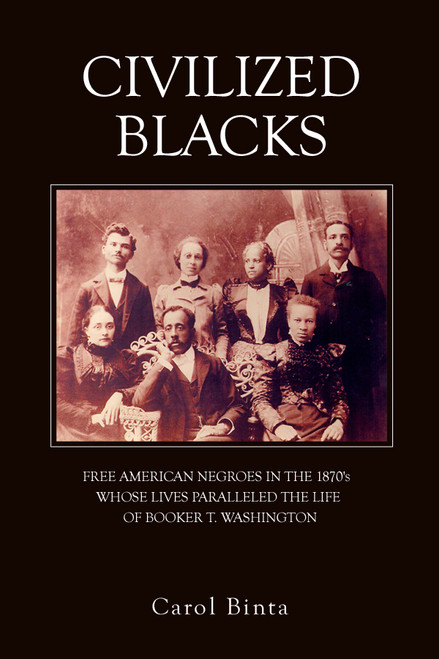 CIVILIZED BLACKS: FREE AMERICAN NEGROES IN THE 1870's WHOSE LIVES PARALLELED THE LIFE OF BOOKER T. WASHINGTON
by Carol Binta

Civilized Blacks: Free American Negroes in the 1870s Whose Lives Paralleled the Life of Booker T. Washington is a work of creative historical fiction designed to illuminate a commonly ignored segment of the African-American experience.

Drawing on the life and work of Booker T. Washington, author Carol Binta has portrayed the trials and achievements, as well as the daily lives, of the Black American elite culture of the period. With an engaging and realistic cast of characters, she portrays accurate social structures and customs while drawing the reader into the tale she has created. Particularly striking is the emphasis on Washingtons affirming attitude toward women.

Both entertaining and enlightening, Civilized Blacks: Free American Negroes in the 1870s Whose Lives Paralleled the Life of Booker T. Washington offers a new perspective on this often forgotten portion of history.

Carol Binta has a masters degree in psychology and a bachelors of science from Temple University School of Communications. She was awarded six different fellowships to pursue her graduate studies in speech and communications. Full of wonder lust, as she calls it, she instead traveled abroad for nearly two years, observing cultural mores and family life as far east as Pakistan and to the south of the Mediterranean Island of Crete. Her five-month stay with a Sufi order in England and then in Holland ended abruptly. She immediately returned to the States, disillusioned about the vast ocean of deception that covers the globe. She found her truth in her native country in the backyard of her forefathers in South Carolina.

Ms. Binta is a community activist, licensed therapist, Reiki practitioner, musician, and poet. She plans to chronicle her travels through Europe, the Middle East, and the Near East, as well as portions of her own personal journey, in future writing projects. She currently has a private practice as a psychotherapist and is the mother of three daughters, one step-son, and three grandchildren. The present project was conceived in 1992 and completed in 2012. It was initiated when Ms. Bintas youngest daughter, Ambiya, was assigned the book Up from Slavery in the fourth grade. Ms. Binta was so inspired by the life and work of Booker T. Washington that she committed to writing an historical fiction to illustrate the Black American elite culture and, in particular, the affirming attitude Booker T. Washington had toward women.