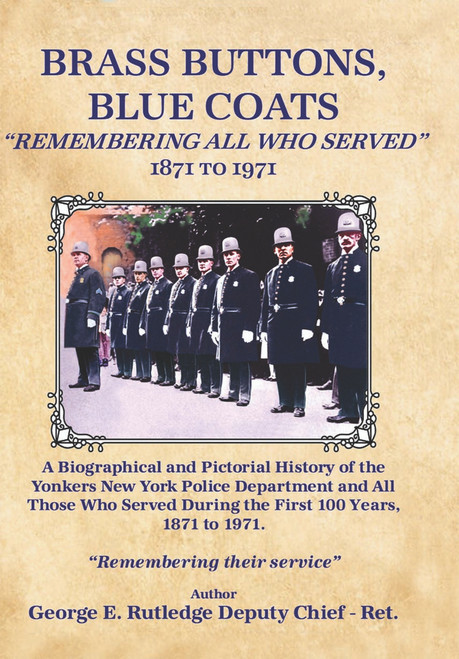 As a young police sergeant in 1976, George E. Rutledge met a veteran who told him, “I served 35 years in our police department and the day I retired was the very last time I ever heard from anyone in the police department. And the same thing will happen to you.” Rutledge has dedicated his life to making sure all who served in the Yonkers Police Department are remembered and honored. Brass Buttons – Blue Coats is a thorough documentation of all individuals who have served from the beginning of the Yonkers Police Department to 1971. Personal profiles and photographs create a lasting memorial of service.

Civil War veterans, Vietnam veterans, rescue workers after 9/11, and Special Olympic volunteers – the Yonkers force is filled with people who have dedicated their lives to their country and their community. Rich with details of service and crimes over 100 years, Brass Buttons – Blue Coats is both a fitting tribute to brave men and women as well as a fascinating look at the history of Yonkers and the history of crime.

George E. Rutledge was appointed to the police department in 1964 at 23. He has worked as a patrol officer and as a detective. Throughout his career he has investigated organized crime, worked undercover robbery, and was Captain of the Intelligence Unit. He has served in many roles in the department and has focused his attention on honoring police retirees. He created the Yonkers police museum which was later renamed in his honor.

After retiring from the department in 2000, Rutledge established his own private investigation business. Retiring again, he now lives in Florida with his wife, children, and grandchildren. He enjoys spending time with them, motorcycle riding, reading, and enjoying old and creating new friendships in the Florida sunshine.

Rutledge is a life member of the US Marine Corps League; Yonkers PBA; Founder and President of the Yonkers Police Historical Society; the Capt.’s, Lt’s & Sgt’s Association; the Police Athletic League Advisory Board; Police Holy Name Society; the Yonkers Kiwanis Club; the Yonkers Elks Club; and the NY Police & Fire Retirees Association. He continues his research into police history.