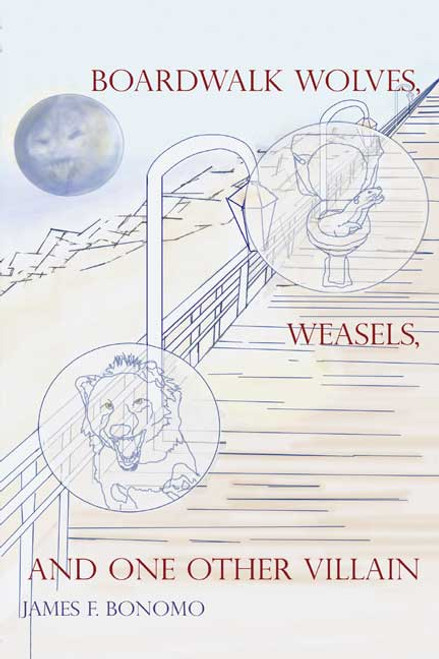 by James F. Bonomo The long days of summer vacation often promise adventure and new experiences, but for one eleven-year-old boy, the summer spent at his grandparents house at Rockaway Beach brings a rewarding mix of exploration, challenges, and life lessons. In Boardwalk Wolves, Weasels, and One Other Villain, young Laurie spends his days following his child-like logic and single-mindedness. Whether its struggling to understand the complex emotional world of adults, scheming with friends to vie for a coveted prize at the arcade, or enduring countless confrontations with a reckless and dangerous bully, Laurie learns that his actions can bring unintended consequences. One adventure in particular threatens everything he knows: trying to lure out the killer mad dog or is it a wolf? said to live under the boardwalk. When Laurie seeks to discover once and for all whether such a beast inhabits the beach, ultimately he finds something more valuable in the poignant outcome of this nostalgic tale. ABOUT THE AUTHOR James F. Bonomo is a New York native who has made his home in Florida for the past twenty years; he and his wife share two children. A former vice president of a major national bank, Bonomo holds an associates degree in liberal arts, a bachelors of music, and a master of arts and letters from Roger Williams College-University, Rhode Island College, and Florida Atlantic University respectively. He is currently enrolled in the Doctoral program in the Fine Arts at Florida Atlantic University. He is a fourth-degree black belt instructor and is a member of the Japan Shotokan Karate Association. As an organist, he has performed concert recitals for many years. He has also been a talk show radio host and has produced his own television shows for cable television. Although an avid writer, this is his first published book. (2007, paperback, 184 pages)
×

The Power of Wolves: A Book of Poetry - eBook

The Power of Wolves: A Book of Poetry

Book on Symbols Punctuation: Do Children Know Their Basic Grammar?