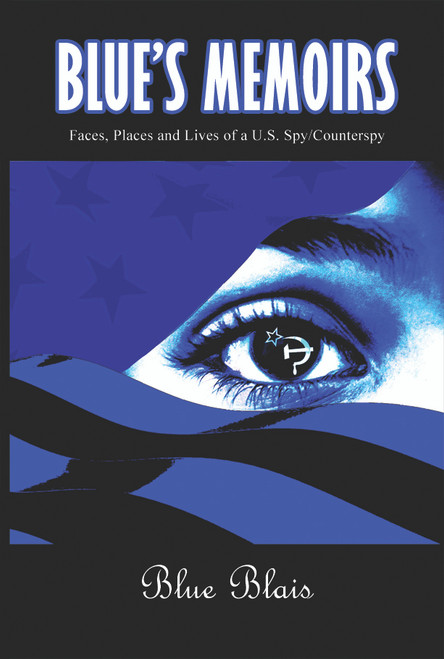 BLUE MEMOIRS: Faces, Places, and Lives of a U.S. Spy/Counterspy is the remarkable adventure of a French-American born in Maine who diligently worked, zealously played, and lived life to the fullest in numerous neighborhoods of the world.

Blue Blais has had a bountiful array of diverse Faces as an Aircraft Mechanic, Flight Engineer, Pilot, Spy, Counterspy, and Diplomat while fluent in French, Spanish, and English. Among much else gained while in America’s Special Forces, Blue became an expert small arms marksman and developed skill in Karate, Garrote, and Savate. He was a Skin Diver, Sky Diver, Tennis Player, Downhill Skier, Sports Car Racer, Sailor, husband, lover, and father. Blue served his country in many thrilling and dangerous Places, including Vietnam, Honduras, Thailand, Venezuela, Zaire, Finland, Germany, Tanzania, the United States, the Azores, and New Zealand. Incredibly, he has out-distanced a feline’s pedestrian nine Lives, having already used up eleven. While in Vietnam, he was shot out of the sky twice and escaped attempted bombing two other instances. In 1978, Blue was headed toward certain death with the Georgetown Guiana Kool-Aid Drinking Suicide of the Jim Jones Cult followers. 1998 in Tanzania, Blue survived a lethal explosive for a third time, in the bombing of the American Embassy in Dar es Salaam. There was no escape even in Homestead, Florida, where Blue was shot at and lived to tell the tale. He survived two horrendous car accidents in Maine and Kinshasa, Zaire, nearly drowned skin diving in the Azores, and played with fire on a perilous DEA Operation in Medellin, Colombia.

As an air commando in Vietnam, Blue flew 108 combat missions, a total of 665:35 combat hours, earning the Distinguished Flying Cross and five Air Medals. In Caracas, as a military spy, he took out the Russian Deputy Chief of Mission to Venezuela. Then flipping vocations, as a counterspy in Helsinki Blue helped set up URSA (the Soviet Union Support Agency). In 1998 URSA was a supply agency placed in Moscow and Leningrad in answer to the Soviets’ bugging of the American Embassy in Moscow. URSA had a variety of other functions, some classified. While serving in this capacity Blue played with the KGB in Moscow and Leningrad. When the Soviet Union dissolved, Blue helped Establish American Embassies in Tallinn, Riga, Vilnius, Minsk, and Kiev. As a Diplomat serving the NPSU (New Post Support Unit) Bonn, Germany, he assisted the planting of 20 U.S. Embassies all over the former USSR like Almaty, Tashkent, Tbilisi, and Bishkek. Then as the Balkans crumbled, Blue helped lay the foundations for new U.S. Embassies in Sarajevo, Zagreb, and elsewhere. Finally, when Macedonia gained independence, he was there again to help originate a U.S. Embassy in Skopje. Nearing the end of his Diplomatic career in Dar es Salaam, the U.S. State Department bestowed on Blue the Medal for Heroism.