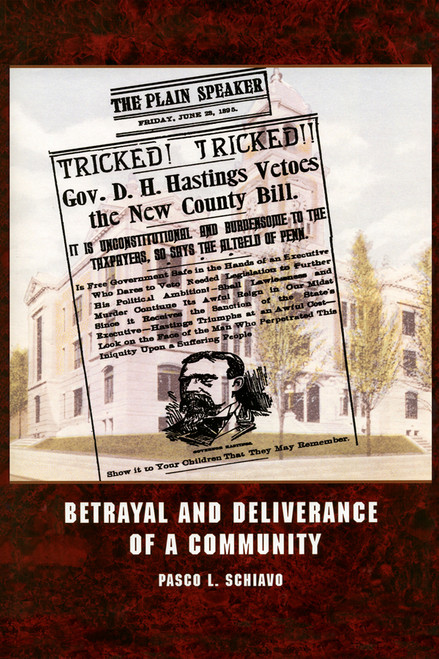 Betrayal and Deliverance of a Community
by Pasco L. Schiavo

The Hazleton area community in Pennsylvania is a good example of such a deprived community whose predicament is further complicated by its being divided up among three separate counties: Luzerne, Carbon, and Schuylkill. However, since this community does not have a county unto itself, it is deprived of all benefits and advantages that come with having a county government solely for that community.

The sovereign state of Pennsylvania has failed to allow any of its deprived communities the opportunity of having their own county government.

Pasco L. Schiavo, in Betrayal and Deliverance of a Community, has stated a case for the creation of a county solely for the Hazleton area community and other communities like it and has drawn up a proposed act supporting his argument, affirming that such communities deserve their own county governments.

A lifelong resident of the Hazleton area community, Pasco L. Schiavo has been practicing law since 1962. He is a graduate of Lafayette College in Easton, Pennsylvania, where he received his Bachelor of Arts degree, and of the University of Pennsylvania Law School, where he received his Juris Doctor degree. He has been an Assistant District Attorney of Luzerne County, a member of the Disciplinary Board of the Supreme Court of Pennsylvania, a first lieutenant in the United States Army Reserve, and a past president of the Luzerne County Commission on Economic Opportunity. He has also written a number of articles, which have been published in various legal journals.