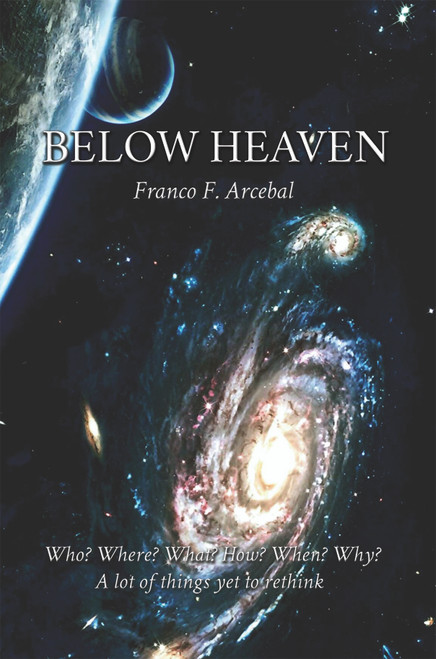 Everything that exists is created by one mysterious being called God. Nothing created is unreal. All created things move immanently. God is sovereign over all creations without exception, without recourse. God unfolds realities to man bit by bit in history; man discovers the realities unfolded by God. Together with the laws of divine origin that govern movements of all created things.

People can only understand the mystery of God through the realities discovered by man. The religious leaders in our current age do not dispute the realities which are presented in Below Heaven. However, millions of people are being misguided by stale beliefs which are still being taught. An eye-opener to both religious leaders and their followers, the information found within these pages can apply to leaders in the fields of government, science, and technology. Follow along as the author steers the mistaken masses towards new realities, the good, the beautiful and the truth.

Franco F. Arcebal was born in the Philippines in 1923 and immigrated to the United States in the late 1980s. While attending school at St. Mary College, Arcebal was one of two pupils groomed for the priesthood. After high school, he volunteered as a guerrilla and was assigned to an espionage mission, captured, severly tortured, and sentenced to death by decapitation but escaped. He participated in the siege of General Yamashita.

Arcebal has written several articles, skits, and manuals over the years. Also he has been awarded a variety of honors, ranging from the Philippine Liberation Medal to the Carson City Community Leadership Award.

Dreams and Visions of Heavens in the Rapture - eBook

P Is for Penelope - eBook