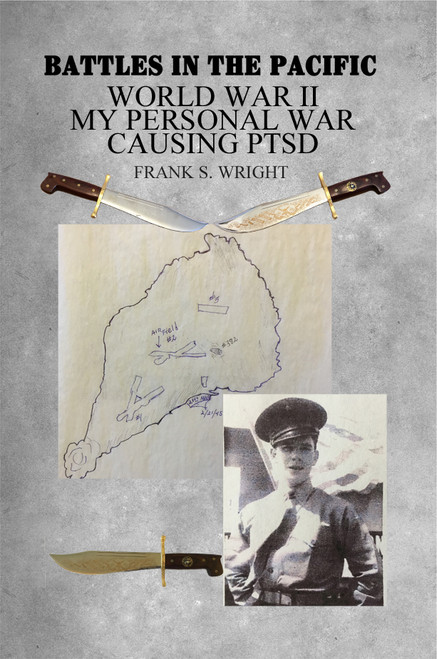 Battles in the Pacific

I fought like mad as the Japanese stormed down the hill yelling “Malians you die, Malians you die.” I emptied my rifle magazine, twice. Out of ammo I slashed and plunged my bayonet into as many as I could until…

Battles in the Pacific is Wright’s autobiographical account of his four years of enlistment in World War II, including two years in the South Pacific. On January 21, 1942, Wright entered the U.S. Marine Corps by lying about his age. His was Sixteen at the time and living in Little Rock, Arkansas. He reported to boot camp on January 24, 1942 at the 12th Recruit Battalion, Marine Corps Recruit Depot, Platoon 150, in San Diego, California.

Like many war veterans, Wright’s traumatic experience in war left him in a battle with Post-traumatic stress disorder (PTSD). His detailed description of his teenage years shows why he still feels the effects several decades later. Wright’s hope is that other veterans will find hope and help through his book and perhaps be inspired to write about their own experiences.

Frank S. Wright was born on July 5, 1925, in Arkadelphia, Arkansas. He spent four years in the U.S. Marine Corps, and as a member of the 4th Marine Raiders Special Forces with Colonel James Roosevelt as commander. He fought in four major battles, traveled between islands on eleven different Navy ships, was wounded by a bayonet in the stomach while recapturing Guam, and was shot in the chest and arm by machine gun fire on the island of Iwo Jima. He spent the last six months of his enlistment as a Marine drill instructor training new recruits.