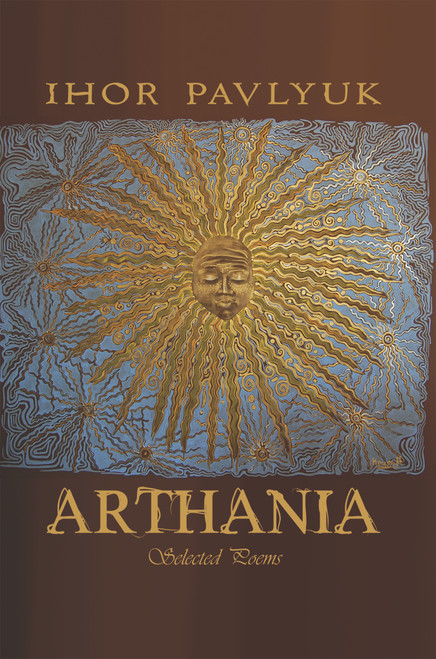 Arthania is a personal prayer to God, which can be heard and read by people, and animals, and plants, and stars. New song rhythm forms and meanings are proposed in this book; the truth of author Ihor Pavlyuk’s life (as a citizen of Ukraine, who lived and worked in many countries of the world) is consonant with all the people of the planet who can take the subtle energy they need from this book if they adequately catch the wave of his soul through an interpretation.

Within are themes of freedom, of the individual and society, the theme of love for nature, for the homeland, for one’s parents, other people, the theme of freedom, orphanhood (the author grew up an orphan), the struggle for independence—all expressed in this autobiographical book in a poetic style. His life credo is expressed in this book with these words: “I am ready to live for ages and I am ready to die at every moment.”

Ihor Pavlyuk (sometimes spelled as Ihor Pawlyuk, Igor Pavlyk, Igor Pavluk; Ukrainian: І́гор Зино́війович Павлю́к) is a Ukrainian writer, translator, and research worker. He was born in the Volyn region on January 1, 1967. His mother died ten days after giving birth to him and he was raised at the home of his grandfather and grandmother on his mother’s side—migrants from the Helm region. He is a Winner of a 2013 English PEN Award and a Doctor of Sciences in Social Communication. Ihor is a member of the European Society of Authors. Books of poetry by Ihor Pavlyuk are published in the USA (2011, 2019), Russia (2012), Poland (2012), England (2013), and France (2015).

Now Ihor Pavlyuk is a Leading Researcher of Taras Shevchenko Institute of Literature of the National Academy of Sciences of Ukraine in Kyiv, Professor of Ukrainian media at Ivan Franko National University of Lviv. He has participated in various international literary festivals. Works of Ihor Pavlyuk have been translated into Belarusian, Bulgarian, Chinese, English, French, Japanese, Latvian, Polish, Russian, and other languages and published in such magazines as The Apple Valley Review (Volume 7, Number 2 (Fall 2012)), Muddy River Poetry Review, Asymptote, Gold Dust (Issue 23), The Adirondack Review, The Recusant, Metamorphoses, Eurasia Review, The World Poets Quarterly, and many others.

As I write, thirty-five babies of international parentage are being cared for by nannies in a hotel room in Kyiv. Swedish, Spanish, Chinese and British children born of surrogate Ukrainian mothers, they have been left in limbo by the pandemic, and must wait to be claimed by their biological parents until the country opens its borders again. The question of the parentage of poems is an open one – some poets feel they are simply channels for universal visions; some feel tenderly possessive toward their creative offspring; others acknowledge the reader’s place in co-creating the meaning of their work. However one looks at it, Ihor Pavlyuk’s poems are far more fortunate than these stranded babies and their parents; dancing freely across borders and oceans, each ‘a precise and windblown snowflake’, they offer the world subtle insights crystallised from a long, arduous and complex history. War-torn between East and West, Left and Right, modern Ukraine is also a country indebted to science, in love with its literature, and culturally steeped in diverse faiths, Christian, Islamic and pagan traditions. Ihor Pavlyuk, widely regarded as one of the leading Ukrainian poets of his generation, claims the right to tread all these boundaries as ‘a lone wolf’ slinking between ‘a manger of hay . . . [and] the tsar of flowers’ (‘The Right to Be a Lone Wolf’, Arthania). At this time of global isolation and uncertainty, his poetry reminds us that we all belong to the Earth - and to the cosmos.

A few words about the book of Ihor Pavlyuk "Arthania"

"Ihor Pavlyuk has created a world that reawakens the dormant spirit of Ukraine’s past and is now expressed in these magnetic words.  His voice is lyrical and epic: a meditative lyricism that moves peoples of different origins and identities to feel in harmony with land and trees, grass and water, epic in its profound vision of history and human beings. Translators and editors H. Kosiv, Yu. Lazirko and H. Sheers have reproduced the energy of Ukrainian rhyme and met the expectations of contemporary English-speaking readers who live under constant pressure but who want to enjoy peace and silence despite the aridity of our post-postmodern life. The voice of these poems has a quiet omnipotence and explains what it means to be human.

PhD, Shevchenko Institute of Literature of the National Academy of Sciences of Ukraine.