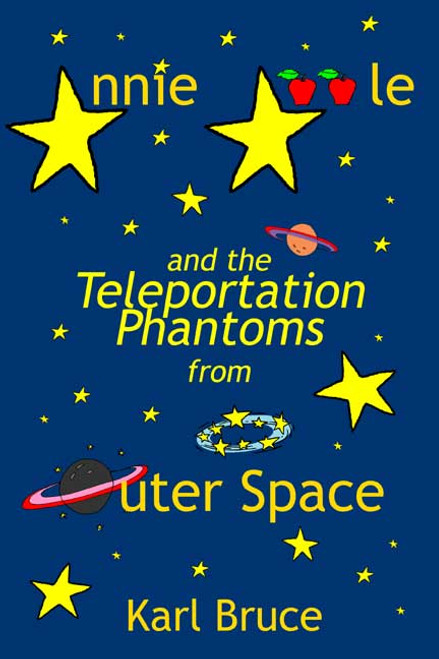 by Karl Bruce Annie Apple is a ten-year-old girl who is gifted with a telegeno mind that gives her special tele-powers. She uses these powers against the evil forces of boom and doom that loom up to make gloomy trouble for the whole wide world. Annie gets caught and dragged helplessly into a wild tangle of spooky, fearful moments of kidnapping, bumbling bombers who plot to take over the planet Earth, wild animals roaming the countryside and ancient beasts from millions of years in the past, phantoms, and star wars with space aliens, their terrible guns, and their monster creatures from other planets that invade Earth. With grace, great courage, and presence of mind in the face of danger, Annie Apple pushes through scary, hair-raising, goose-pimply moments of breathtaking, sizzling, dizzying, roller-coaster happenings to save Earth and other worlds in far-off space happenings whose sound effects can switch suddenly from very serious screams of terror to delighted, roaring laughter when Annie and the world get the last laugh over the space aliens. Much of Annie Apple and the Teleportation Phantoms from Outer Space is clearly designed to be read aloud. Read it to the kids, or let the kids read it to you. Its great fun either way. ABOUT THE AUTHOR Karl Bruce has spent all of his eighty years in the Bay Area of northern California. He is colleged and much of his spare time (that is, the time when he isnt writing) is devoted to tracking his interests. He is particularly interested in childrens welfare and wrote Annie Apple and the Teleportation Phantoms from Outer Space simply, he says, as entertainment for kids. (2006, paperback, 166 pages)
×